Home MMA News Georgi Karakhanyan: Patricio Pitbull’s trash talk is just ‘to get his name out there more’
ShareTweet 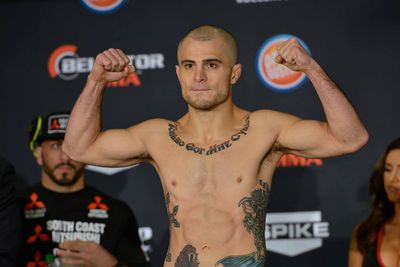 The hotel skirmish between Patricio Freire and Will Brooks the week of Bellator 145 drew headlines last month. It wasn’t even Freire’s first confrontation with a fellow fighter in the second half of 2015, though.

Back in August, Freire and Georgi Karakhanyan had to be separated during a poster signing the week of Bellator 141. The two were supposed to fight in April before Karakhanyan tore his ACL and have gone back and forth a bit on social media. Freire’s wrestling coach Eric Albarracin captured the incident on video.

Tensions were High between fight camps as Patricky and Saad Awad signed posters for This fridays #Bellator141 . Bellator World Champ Patricio Pitbull caught the eye of possíble title contender Georgi Karakanyan , They have been going back on forth on Twitter and their twitter beef carried over into Bellator check In room . Needless to say fireworks ensued. Saad step up to calm down his training partner , Patricky Pitbull got riled up. Joinha and Bellator oficials served as arbitrators . Leandro Higo as ref. Friday the cage closes on Spike TV and Pitbull and Saad will get after ….View original article