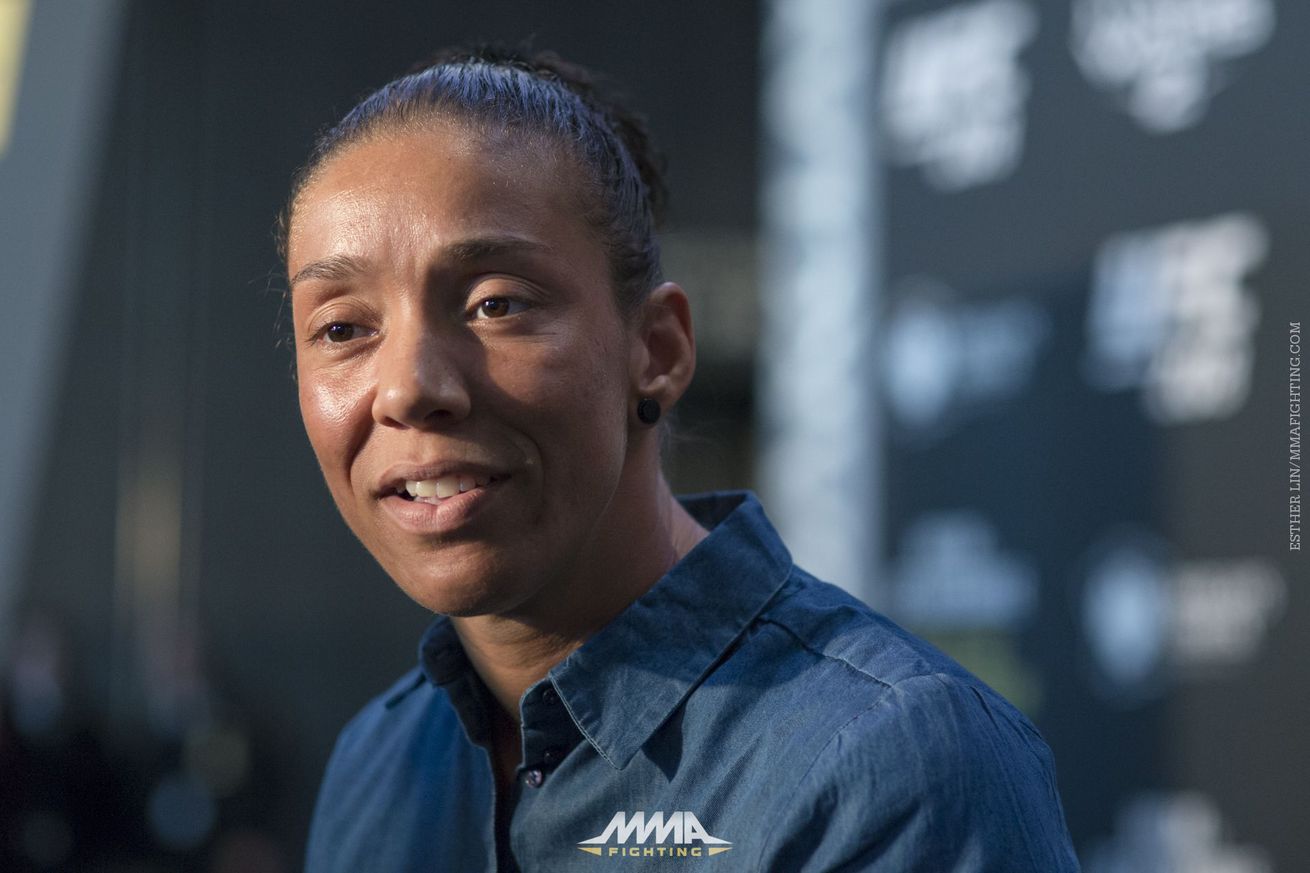 NEW YORK — Germaine de Randamie may be new to the UFC spotlight, but she’s no stranger to standing in front of headhunters like Holly Holm. In fact, she’s faced plenty of steep challenges in her fighting career — including the unique experience of taking on a man in the boxing ring.

The Dutch fighter, who fights Holm for the inaugural women’s featherweight title in the main event of Saturday night’s UFC 208 pay-per-view card in Brooklyn, made mention of knocking out Tom Waes 10 years ago in Europe during Wednesday’s media day.

And she mentioned it again at Gleason’s Gym after the open workouts on Thursday when talking about the daunting task for fighting Holm on such a big stage.

“Every fight is the toughest fight of my career,” she said at the media scrum. “I respect Holly. She’s a tremendous athlete. To me it’s such an honor. But I’m ready. If I fought men, I can fight Holly.”

When asked to elaborate on that fight, de Randamie was all smiles recalling the memory.

De Randamie knocked Waes out violently, and the clip of that fight has been circulating around this week. One thing that footage accomplishes is that that de Randamie has got heavy hands, and she’s not afraid to let them go. Like Holm with her extensive pre-MMA boxing career, de Randamie is a decorated kickboxer who has competed for more than a decade.

She told MMA Fighting on Wednesday she felt that her and Holm would cross paths sooner or later, because she wants to face all the top women in the sport.

“Yes, everybody knows I want to fight everybody in the division,” she said.  “If you want to call yourself a true champion you face everybody. You don’t pick your opponents, ‘oh I don’t want to fight that person, not today, because I don’t feel like it.’ You have to face everybody. And I believe the UFC made a great move. I believe we’re going to make an exciting fight. Our styles [together] make exciting fights.”

Since debuting against Julie Kedzie at UFC on FOX 8 in 2013, de Randamie is 3-1 in the UFC. She has won back-to-back fights as a bantamweight, scoring TKO victories over Larissa Pacheco and Anna Elmose. Her only loss in the promotion so far came against current 135-pound champion Amanda Nunes at UFC Fight For the Troops 3 in Fort Campbell, Kentucky.

Given that both her and Holm are known to be strikers, de Randamie said she is hoping they can stand and trade and put on a show. But when asked if she thought Holm would accommodate her in that hope, she shook her head.

“No, I don’t think so,” she said. “And I understand. She has her plan, and I have my plan. I welcome everybody to meet me in the middle. Let’s do this, let’s make it exciting. I’m not afraid to get knocked out, and I’m not afraid to take risks. I hope she’ll stand with me, but I don’t see it playing out that way.”

One thing that de Randamie promised was that Holm — like Waes — would come away from her encounter knowing she was in a fight. She said that Dutch fighters have a way of creating havoc for opposition.

“We’re small, Holland is small,” she said. “But we’re a very strong nation. We have the best stand-up fighters in the world. I believe if you ask any fighter that has fought a Dutch kickboxer, he will tell you, that was the worst fight I’ve been in my life. Because it was fight. No matter what, if you face a Dutch fighter you know you’re in a tough fight. Bringing the belt back home…that would be a dream come true.