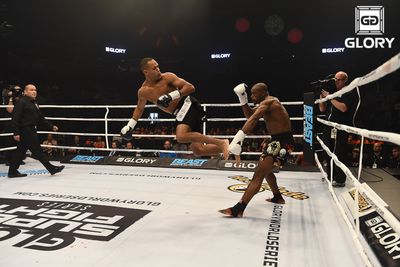 Raymond Daniels is must watch material.

The GLORY welterweight contender put on a show against Jonaton Oliveira in the opening bout of GLORY 19 on Spike TV, which took place on Friday night (Feb. 6,2015) from Hampton Coliseum in Hampton, Virginia.

Earning his ticket to the welterweight tournament final, Daniels unleashed a lethal dose of spinning techniques on Oliveira that had the Brazilian in all sorts of trouble early on. Ultimately, the American earned the victory with his third knockdown of the fight in the second round.