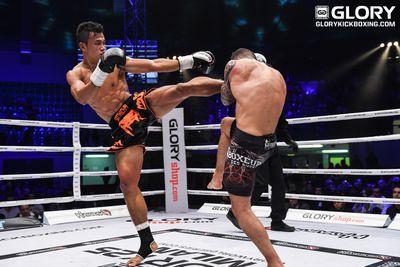 A controversial decision in the main event of GLORY 25 left Robin van Roosmalen holding his lightweight title after a spirited battle with No.1-ranked contender Sittichai Sitsongpeenong on Friday (Nov. 6, 2015) inside The Palalper, in Monza, Italy.

The decision in favor of “Pokerface” left an incredulous expression on that of the Thai challenger, GLORY commentators Mauro Ranallo and Stephen Quadros, the Italian fans in attendance and pretty much everybody else watching on ESPN3 (details on GLORY/ESPN deal here).

All three judges scored the bout 48-47 for van Roosmalen.

Sitsongpeenong looked to be in control of every round of the fight. He used his jab to measure distance and landed his trademark left round kick to the body on several occasions. When those weren’t landing they were still slamming into van Roosmalen’s arm as he was blocking them.

Neither fighter scored a knockdown or had their opponent in severe trouble, but Sitsongpeenong appeared to be in full command throughout. Van Roosmalen did land some successful strikes in certain spots, and a couple of nice combinations but they were few and far between compared to “Killer Kid.”

“He is a great fighter,” van Roosmalen told Stephen Quadros after the fight. “I won and I’m ….View original article