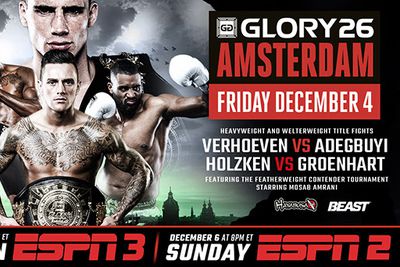 GLORY kickboxing returns to Europe for its second straight fight card on Friday (Dec. 4, 2015) with GLORY 26, live from RAI Amsterdam in Amsterdam, Netherlands.

The fight card will be headlined by a pair of title fights in the heavyweight and welterweight divisions.

In the main event, the GLORY heavyweight champion, Rico Verhoeven (46-10), will defend his title against No. 1-ranked contender, Benjamin Adegbuyi (25-3) in a rematch from GLORY 22, where Verhoeven dominated en route to a unanimous decision victory.

Adegbuyi earned a second chance at Verhoeven by winning the GLORY 24 “Contender” tournament in October. “Mr. Gentleman” defeated Mladen Brestovac by technical knockout in the first bout and squeaked past Jahfarr Wilnis by split decision in the final to win the Ramon Dekkers memorial trophy and get another crack at GLORY gold.

In the co-main event, GLORY welterweight champion, Nieky Holzken (87-11 1NC), will defend the welterweight title against the No. 1-ranked welterweight Murthel Groenhart (58-19-3). This fight is a rematch from United Glory in 2010, where “The Natural” defeated Groenhart by decision after the bout went into an extension round.

Groenhart earned the shot at the title by winning the “Contender” tournament at GLORY 25. “The Predator” defeated Nicola Gallo ….View original article