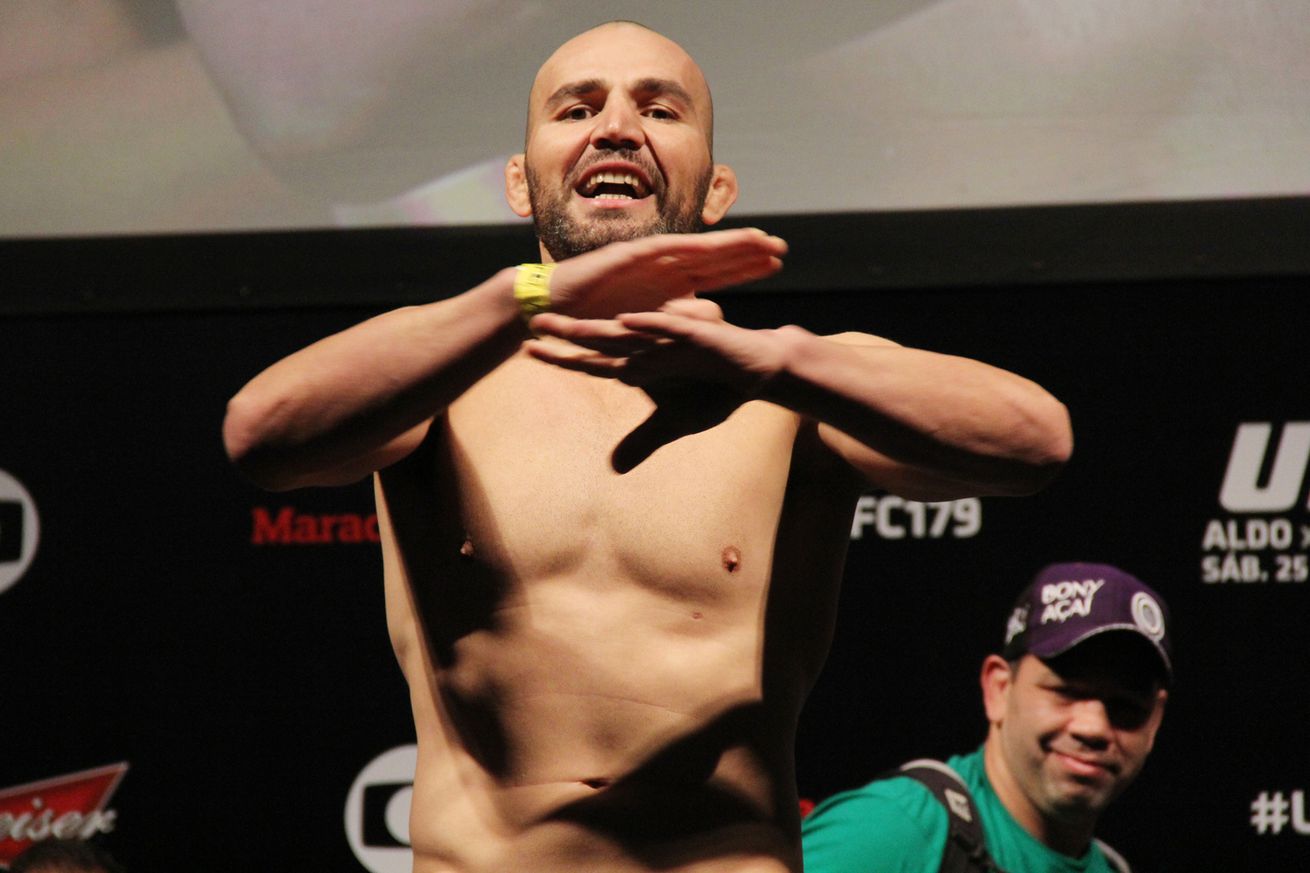 A rematch between UFC light heavyweight champion Daniel Cormier and former titleholder Jon Jones is targeted for UFC 214 on July 29, and another top 205-pounder thinks that’s the right call.

Glover Teixeira, who challenged Jones for the gold back in 2014, disagreed with the suggestion that Jimi Manuwa could be next in line for Cormier instead of the returning Jones.

“Jimi Manuwa isn’t qualified to fight for the belt,” Teixeira told MMA Fighting. “He didn’t beat any top fighter yet.”

Manuwa, who finished Ovince St. Preux and Corey Anderson in his last couple of fights, was sitting cageside earlier this month at UFC 210, watching Cormier submit Anthony Johnson to defend his title. Manuwa traded words with the champion right after.

“I think Jimi Manuwa has to beat a top fighter first before thinking about fighting for the belt, or maybe two or three top guys,” Teixeira said. “Jimi Manuwa is down there, in my opinion.”

Teixeira currently sits at No. 2 in the UFC light heavyweight rankings, a spot above Manuwa, after “Rumble” announced his retirement from the sport. In fact, Teixeira didn’t expect Johnson to end his career.

“I was surprised with his decision,” Teixeira said. “Anthony Johnson still has a lot of miles left, but it’s his decision. Everyone does what’s best for them. You have to respect that.

“It was a mistake to try to wrestle Cormier,” he added, “but nobody knows what was going on in there except for them. Maybe he hurt his hand, we don’t know.”

Manuwa, Johnson, and Cormier vs. Jones aren’t his focus right now, though, as Teixeira prepares to meet Alexander Gustafsson in the main event of UFC Fight Night 109 in Stockholm on May 28.

Teixeira vs. Gustafsson was originally booked for June of 2015, when the Brazilian was coming off losses to Jon Jones and Phil Davis, and Gustafsson had just lost to Johnson. Two years later, Teixeira balances what has changed since then.

“I don’t know if I’m a better fighter now,” Teixeira said. “I was younger back then, but I have more experience now. I try to be positive. The experience will definitely help me.”

Speaking of experience, Gustafsson is counting on Davis’ knowledge of his opponent’s game, as the Bellator light heavyweight champion traveled to Sweden to help “The Mauler” prepare for the bout.

“That fight with Phil Davis was a different fight, I was in a different moment in my career,” Teixeira said of his unanimous decision loss to Davis in 2014. “It was a bad fight. I was well prepared, but I didn’t recover well from the weight cut, and that didn’t help me. That hurt me a lot.

“Phil Davis will help Gustafsson, for sure, but I have my training partners here. At the end of the day, I’ll come out with the win. I’m not the same guy that fought Phil Davis.”

Teixeira just aims to evolve and do his best inside the Octagon to move one step closer to a second shot at the championship, he says.

“To beat Gustafsson, I have to be ready for everything,” Teixeira said. “My striking is on point, and so is my wrestling. He’s a striker, but he likes to go for takedowns as well, and so do I. I’m comfortable standing, but if he makes a mistake, I’ll take him down to use my jiu-jitsu and ground and pound.”