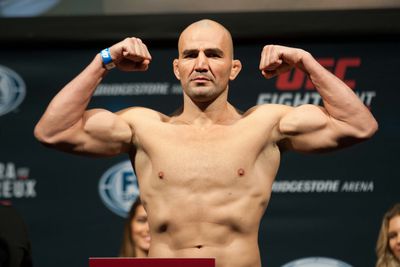 The Brazilian is an eager observer of a pending title clash between “DC” and “Bones.”

Most mixed martial arts (MMA) pundits expect reinstated former pound-for-pound star Jon Jones to be gifted an immediate shot at the Light Heavyweight belt he was stripped of last April, which now sits around the waist of his rival Daniel Cormier.

Not all are happy about “Bones” leap-frogging the well-behaved 205-pound pecking order … especially this guy.

However, there is past No. 1 contender, Glover Teixeira, who was happy to see “DC” retain his title against Alexander Gustafsson last month (highlights) and is cheering for the American Kickboxing Academy (AKA) leader in a potential rematch Jones.

He said as much during a recent interview with MMAmania.com:

“We see Daniel Cormier show the skills, man. He beat Anthony Johnson, he beat [Alexander] Gustafsson. He’s a good champion and I believe him and Jones is going to be a good fight. We have to support him as champion. He’s got the championship mentality. It could be a different fight with Jones [now]. I believe that he could beat Jones. To tell you the truth, I hope he beats Jon Jones because ….View original article