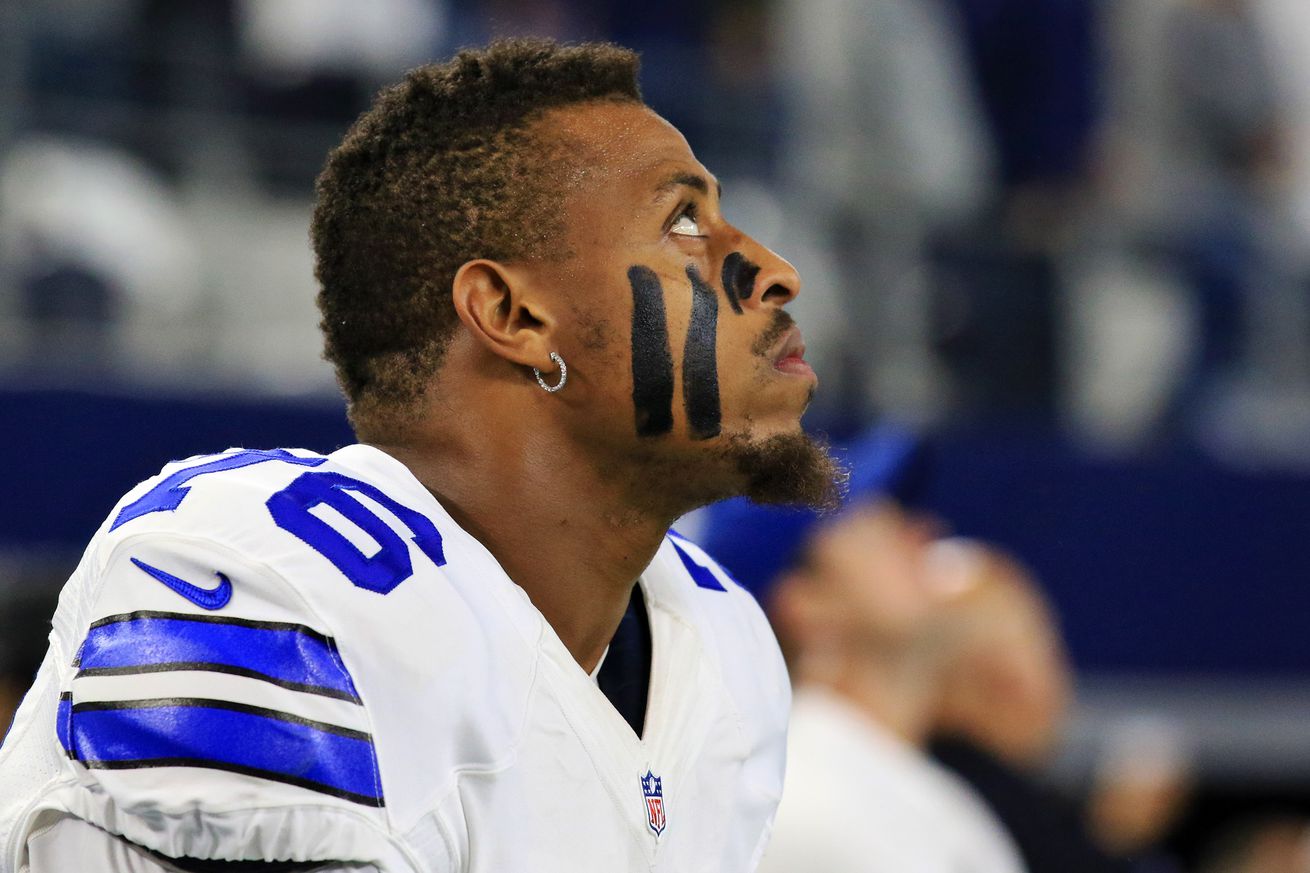 The decision was met with instant and widespread controversy, as Hardy’s Pro Bowl run as a defensive lineman was effectively derailed by domestic violence allegations that led to his departure from the Carolina Panthers and suspension for 10 games of the 2015 NFL season. A drug arrest on cocaine possession charges in Sept. 2016, which preceded his MMA announcement, also further complicated matters.

Hardy has since spent the last three months acclimating himself to MMA while living within the dorm rooms at the American Top Team gym in Coconut Creek, Fla. There he trains under a cadre of decorated coaches and UFC fighters as he studies the basics of the fight game. And for Hardy, the experience has been invaluable as he begins to put together the pieces of his new life.

“It’s helped me a lot of ways,” Hardy said Monday on The MMA Hour. “I have a lot of problems as a human being. It’s not something that you do, just walking around saying ‘I’m perfect’ or ‘I’m good.’ Man, I have a lot of different issues that I’m definitely working through and working on. I would say this helps me channel everything. It helps me just come back down to Earth, be humble, because these are machines that I see everyday. I get choked out, punched in the face, and laid out on the mat daily, and that’s not something that a guy my size and my stature with my history has every come across.

“It’s a humbling experience, man,” he continued. “Actually, it’s making me really appreciative of everything that I’ve had and everything that I have, and the opportunity that I have to kinda come in and show myself as a guy that is not what everybody says on TV, or, ‘he’s not a monster, he’s not a killer, a women beater,’ this, that and the other. It gives me an opportunity to just come in, be a humble guy, and learn, and honestly just be at the feet of all these champions who walk around like they’re just normal guys … and have the opportunity to make myself better one more time, one last time in sports and life in general.”

In 2014, Hardy was arrested for an alleged domestic assault committed on an ex-girlfriend that included accusations by the accuser that Hardy threatened to kill her after throwing her onto a bed covered in assault weapons. Hardy was subsequently found guilty by a Carolina judge, however the case was eventually dropped when the victim failed to appear in court to testify for Hardy’s appeal, having reportedly reached a settlement with Hardy out of court.

Altogether, the incident sunk Hardy’s once-promising NFL career, and the former Pro Bowler has largely stayed out of the public spotlight since an April 2016 interview with ESPN reporter Adam Schefter delivered more scrutiny upon Hardy for the unapologetic manner in which the 28-year-old handled himself.

“I kinda regret, overall, just the way it came across,” Hardy said on The MMA Hour. “It was a moment where I needed to portray something for myself, not to make anybody believe anything, but just as a man and as a person — I wanted to get something across, and that didn’t get across. The fact that I wasn’t able to let people know how sorry I was about it, that was something that really frustrated me, the outcome that people got from it.”

Hardy on Monday vowed to take steps towards change. At the behest of his new MMA manager, Malki Kawa, Hardy will begin drug rehabilitation and anger management classes next month. Hardy also repeatedly blamed himself for the downward spiral that led to his NFL exile.

“That one of the things he told me when I originally met him,” Kawa added. “He said, ‘you know, the biggest mistake I made in all of this was the fact that I was even there in the first place.’ Because a lot of times, guys, when they get in trouble, it’s never them, right? And that’s what we always hear and it’s always the wrong people they hang around with, or where they’re at and what they’re doing. I’m not in any way, shape, or form trying to blame this on circumstance or whatever, but you can start to kinda see the growth of what he’s going through, what he’s starting to realize, like, ‘hey, I don’t need to be out at night, late night. I don’t need to be drinking. I don’t need to do drugs. I don’t need to do this, I don’t need to do that.’

“’These were opportunities that I was blessed with that I need to take advantage of, and maximize, and have a great career, and go from there. And not put myself in situations to where things like this happen.’ And I think that part of it is when you realize, ‘hey, I may have not done this’ — this is what I’m telling the world, right? — ‘I didn’t do this. But at the end of the day, the fact that I’m here, I’m even in this situation, is my fault.’ And then you begin to start taking accountability of everything that happened and go from there, and I think that’s what he’s been doing.”

Hardy, whose court case for his cocaine charges begins this week, also said it had been “awhile” since he last broke his sobriety from drugs or alcohol.

“I don’t even think I can remember,” Hardy said. “It’s been awhile, man. I had an eye-opening experience, like [Kawa] said. It’s just, once you start realizing that it’s your fault and that you are in a place that everybody wants to be, and that you removed yourself from that place, man, you start looking at the reason. So, there were a lot of reasons of why I wasn’t there, and I just started in MMA mostly trying to figure it out, because I didn’t know. … You don’t go from being a franchise tag defensive end to being nobody and everything went right.

“Honestly, that’s how it makes me feel. It feels like I did this to me, and it sucks. I was where I needed to be, I had everything that I wanted, and the normal story is, ‘man, somebody took it away,’ and I don’t have that. I took it away from myself. Now I’m nobody. I’m nowhere. I’m just in the middle of where I put myself.”

Hardy admitted that he isn’t entirely done with football. He intends to play in a spring league beginning in April, and if an NFL franchise expressed interest in signing him, he’d jump at the opportunity to redeem himself on the field. Such a move would put MMA on the back-burner, but Hardy also said that would be a bridge he’d only cross with Kawa if the opportunity arose. In the meantime, he plans to continue working towards his inevitable MMA heavyweight debut, which will take place when his coaches at ATT believe he is ready.

And when asked the question that has followed him for the better part of four years — has he ever put his hands on a woman? — Hardy answered with a firm “no sir.”

“Like I said, I’m in this position that I’m in, I did it to myself,” Hardy said. “But at the same time, nobody knows the whole story, so I have to take everything with a grain of salt. Those people that don’t want me there (in MMA), I understand. … I’m not Junior dos Santos, who’s been here and putting in the hard work all these years. I’m a new guy coming into the sport that these guys built, so that’s something that’s going to come along with it. Like I said, (ATT owner) Mr. (Dan) Lambert, I appreciate those guys and [Kawa] letting me come in and have the opportunity to prove that I belong here, that I’m somebody who can actually help the sport and bring a work ethic or something good, whatever I can bring that’s good to it, so that people don’t go into thinking instantly when they hear my name, ‘oh, Greg is a wife beater. Greg is a woman beater.’

“Honestly, I wish this stuff never happened. I’m sorry for everything and everybody that I hurt, and coming from a place like that, it makes you grateful for the opportunities that you have, not worried about the negative people that are coming in. They have a right to have that opinion. I’m telling you, I answered your question and I stick to my answer because it’s the truth. But because of what I did, like [Kawa] said, the reasons I was there, any of it, all of it, I did the work, I had it all, and I gave it away. So they have the right to think those things. I’m just glad that Mr. Lambert and all these guys are giving me the opportunity. I’m grateful to come in and not be nobody, be somebody that kids like my son, like my mom and my sisters and my aunts, these people that I’ve been around my whole life, will be proud of and hopefully I’ll win these people over. And if not, at minimum, I hope that I prove and show everybody that I’m a Greg Hardy that’s worth somebody putting their name besides and behind, and that you can respect, who brings something good to a sport, at minimum.”