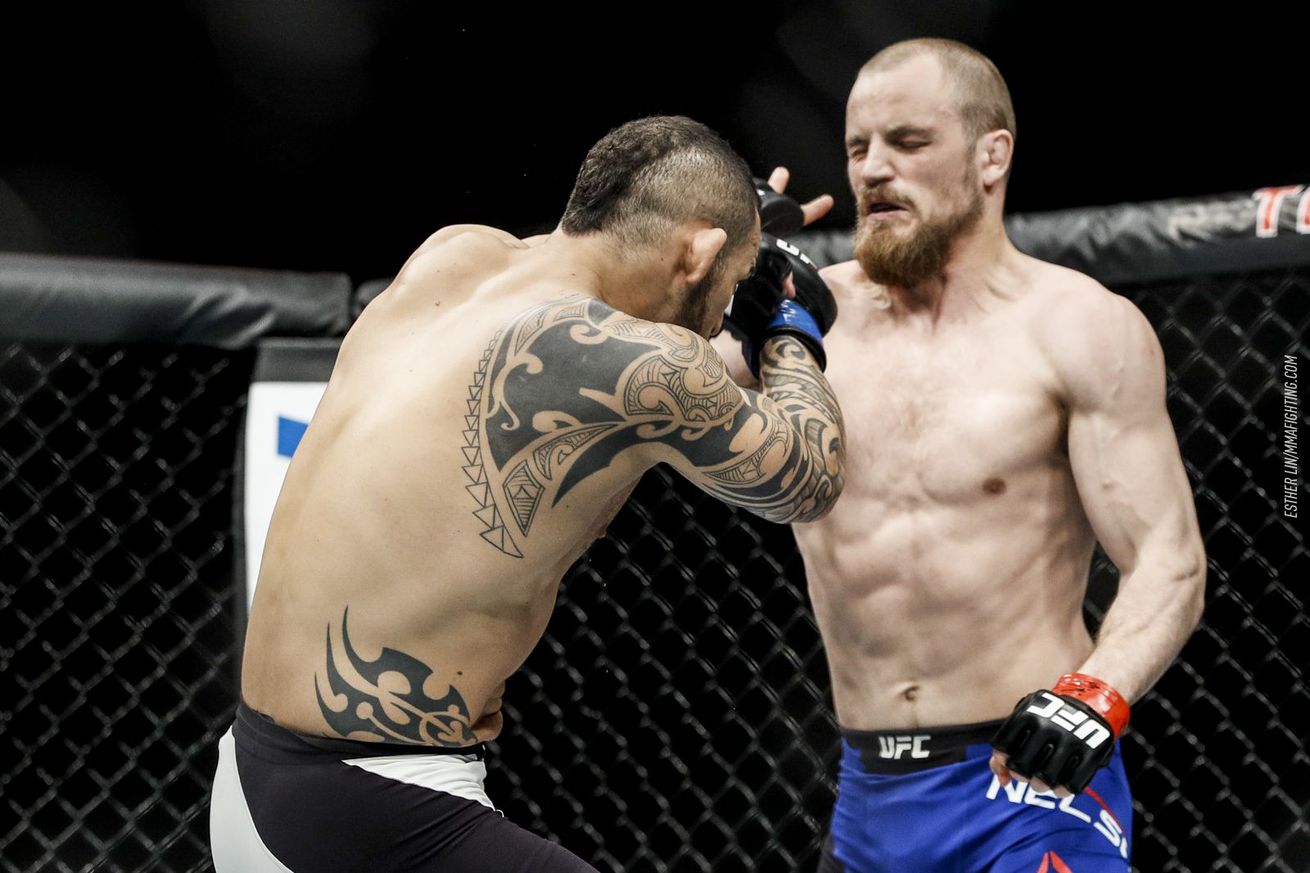 According to multiple members of Nelson’s team — and Nelson himself — on social media, the appeal was denied by the UFC this week. And Nelson’s management and coaches are none too pleased by the decision. Nelson and team were hoping the result would be overturned to at least a no contest.

“There was no time to signal to the referee between the final eye poke and the KO blow,” wrote John Kavanagh, one of Nelson’s coaches at SBG Ireland, on Facebook. “It was a ‘fight ending foul’. What the UFC, athletic commissions and MMA officials have to ask themselves is is eye gouging legal?”

The real point is this- there was no time to signal to the referee between the final eye poke and the KO blow. It was a …

The UFC has not responded to requests from MMA Fighting to confirm that the appeal has been denied, nor requests to explain the rationale for the decision. The UFC regulates itself in some foreign countries, like Scotland.

Ponzinibbio seemed to land at least two accidental eye pokes leading up to the knockout punch in the main event of UFC Fight Night 113. Typically, state athletic commissions will determine whether or not the foul ended the fight when they go about their rulings. If it did not directly end the fight, usually the result will stay in place.

For example, the California State Athletic Commission (CSAC) recently declined to overturn a result between Patricky Freire and Josh Thomson from Bellator 172 in February. Thomson and Freire clashed heads and it was missed by referee John McCarthy. Soon after, Freire knocked Thomson out with an uppercut.

The Nevada Athletic Commission (NAC) also did not overturn a result between Urijah Faber and Francisco Rivera in 2014, because an eye poke from Faber was not the direct cause of the finish — Faber’s choke submission was.

No two situations are alike, though, and Nelson’s team thought this one should have been treated differently. His Paradigm Sports Management team posted on Facebook that it was a fight-ending foul, because there was no time for Nelson to alert the referee in between the eye poke and the knockout blow.

“A more stringent application of the Unified Rules of MMA should have been applied here to rule this fight a no-contest,” the statement said. “We stand behind Gunnar and Team Nelson, and we hope this unfortunate situation will lead to more careful application of the rules regarding eye pokes, as fairness and fighter safety must always be a priority.”

We are disappointed with the UFC’s recent ruling to uphold the result of the July 16, 2017 bout between our client,…

Nelson (16-3-1) posted a blog on his website with details about his appeal and further photos of the eye pokes. The 29-year-old Icelandic welterweight, who had a two-fight winning streak snapped with the loss, stayed in character with a subdued tweet, though.

Disappointed with the ruling but it is what it is. The rules have to change to prevent this from happening again.https://t.co/7m1J6EPRi1

Kavanagh went a step further, writing officials and regulators are playing with fire if they allow eye pokes to go unchecked in MMA.

“I constantly see fighters doing it or with fingers outstretched and I don’t remember ever seen even once a fighter be penalised,” he wrote. “What are they waiting for, permanent loss of sight?”