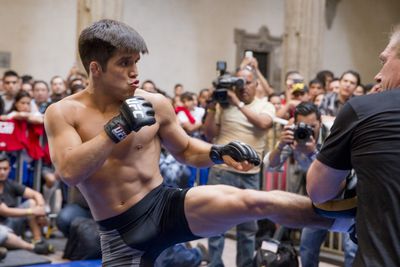 Henry Cejudo took that Free Nick Diaz hashtag and put his money where his mouth is. The former Olympic wrestling gold medalist and current UFC fighter has said that he will not fight in Las Vegas if Diaz is still under suspension by the Nevada Athletic Commission.

Cejudo is changing his tune a little bit now, he said after beating Jussier Formiga by unanimous decision at UFC Fight Night: Gastelum vs. Magny on Saturday in Monterrey, Mexico. There has been some movement in the Diaz case and his legal team is in settlement talks with the NAC. Sources told MMAFighting.com last month that Diaz, suspended and fined $165,000 in September for a third failed test for marijuana, could fight as early as summer 2016.

“I think there’s due process going on,” Cejudo said. “So as soon as that gets overturned, we can talk. I mean, obviously I’m not my own boss. I’d have to sit down and talk to everybody from the UFC and decide what we’re gonna do. [As long as] Nick Diaz is freed, I’ll fight in Vegas.”

Cejudo (10-0) didn’t completely walk through Formiga. It wasn’t a fully dominant performance, though he clearly won every ….View original article