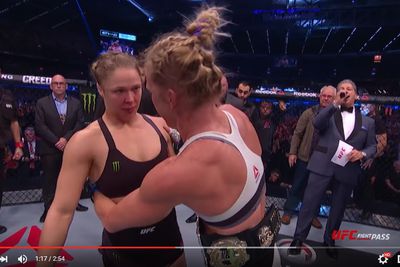 And it’s night and day from what Rousey told Bethe Correia at UFC 190 (see that “cold” message here).

So, what did she say to her fallen foe after so many “Rowdy” outbursts? That was a question Larry King asked when he invited Holm to be a part of his 137th birthday.

And her answer didn’t sound “fake.”

“I really admire you for being such a great, dominant champion,” Holm told Rousey during their post-fight embrace. “None of us would be here without you, so I appreciate you.”

Rousey has yet to be seen — outside of this brief appearance — since surrendering her title “Down Under,” but you can expect an immediate title shot when she returns in 2016 (says this guy).

For much more on the UFC 193 PPV event including videos, reactions, recaps, and more, head over to our comprehensive “Rousey vs. Holm” link ….View original article