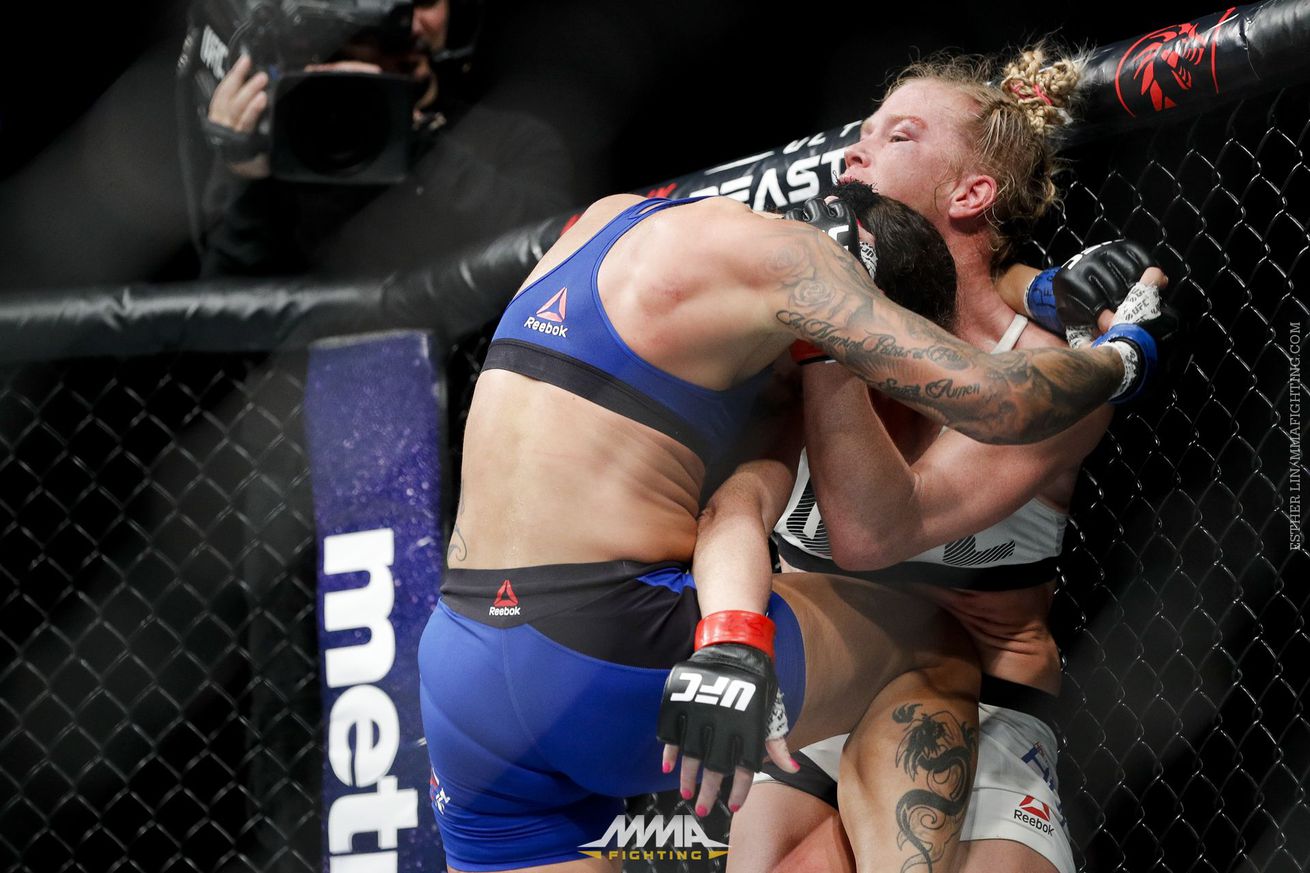 The UFC 208 main event between Germaine de Randamie and Holly Holm was a 25-minute slugfest that left both competitors bloodied and bruised.

Holm believes she won the inaugural UFC women’s featherweight title fight, which the judges gave to de Randamie on across-the-board scores of 48-47.

But according to Holm, no shots delivered by de Randamie stung harder than the ones which landed after the horn sounded to end rounds two and three at Brooklyn’s Barclays Center.

The first time around, Holm was willing to let the let the hits slide, even though they left her visibly wobbling. Referees often give leeway the first time an infraction is committed.

But Holm was surprised that referee Todd Anderson let things go without a point deduction after GDR once again belted her after the horn sounded on round three.

“A lot of times, the first one they give a warning, that’s kind of normal,” Holm said. “I wouldn’t expect them to take a point after the first one, even though it was intentional. The second time, at that point you think they’d do something.”

Although de Randamie, who was not at the press conference, claimed during her in-cage interview that she didn’t do it on purpose, Holm wasn’t buying it.

“It wasn’t like the last punch of a combination after the bell rang,” Holm said. “It was intentional and it was after the bell. What can you do?”

Holm concedes de Randamie got off to the faster start in the fight, but she also believes she rallied to win rounds three through five. With Cris Cyborg’s USADA case pending, Holm believes there’s enough doubt about the veracity of the outcome that an immediate rematch is the correct call.

“I think it merits a rematch,” Holm said. “When you have more than half the people saying the fight should go the other way, that warrants a rematch, so, that would be awesome.”

That said, Holm is now 0-3 since knocking out Ronda Rousey to win the women’s bantamweight title at uFC 193. So she’s going to take whatever comes her way, whether it’s at featherweight or back down at bantamweight.

“I’m sitting in a spot where my last three fights I’m 0-3, so I’m going to take whatever they give me,” she said.