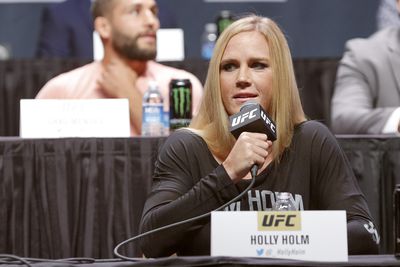 “Bones” knows. And Holly Holm is counting on it.

The former boxing standout has the biggest MMA bout of her life coming up against UFC women’s bantamweight champion Ronda Rousey in the main event of UFC 193 on Nov. 14 in Melbourne, Australia. With her position as a heavy underdog against a champion who has never even been threatened, Holm has turned to someone who knows a thing or two about competing on the big stage: Jon Jones.

Jones, the pound-for-pound best fighter in the world, is Holm’s teammate at JacksonWink MMA in Albuquerque, N.M. During his time off from fighting, he has helped Holm quite a bit in preparing for Rousey.

“Obviously, he’s not going to be sparring with me the way he would with the big heavyweights,” Holm said Thursday on a UFC 193 media conference call. “But we have the same coaches, we have the same team and I love to hear his input, because he’s obviously been able to take what our coaches teach and put it together perfectly. So I love to hear his input on it and he has been very helpful and very instrumental in this fight camp.”