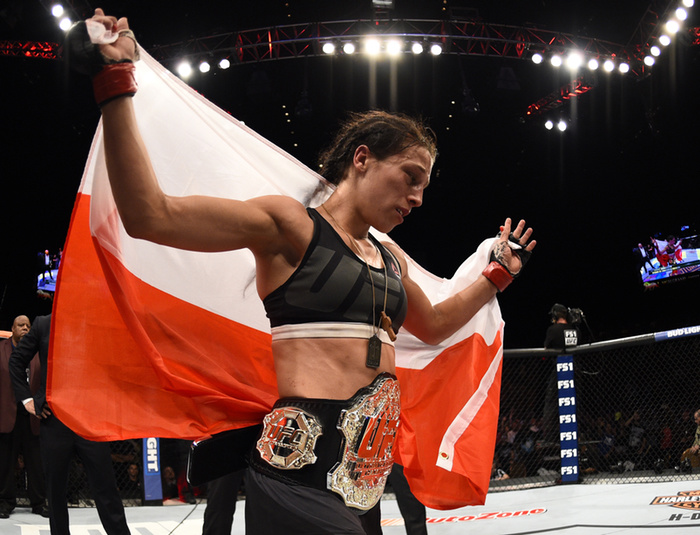 Another night, another big fight in the march towards UFC 200. This time it was Joanna Jędrzejczyk and Claudia Gadelha in the gutsiest slog in the history of their young division. Gadelha made a good case through the first six rounds that her and Jędrzejczyk have fought, but the last two were all Jędrzejczyk. It is hard not to feel for Gadelha, she lost a hotly disputed decision in their first fight over three rounds, came in and dominated the first three rounds of this match, and still wound up losing. But that’s fighting, the numbers on the record don’t make exceptions for how well you did or how hard you tried, the only thing that matters is the ‘W’ or ‘L’.

Gadelha came out at the opening bell and Jędrzejczyk flicked out her jab. A second flicking jab. The third flicking jab was greeted with a stepping jab of Gadelha’s own and the untouchable Joanna Champion was on her rump.

From then on Gadelha stuck to Jędrzejczyk like lacquer. Each clinch saw Gadelha achieve double underhooks and ratchet the champion’s arms up and out like chicken wings. Each struggle along the fence ended with Gadelha slinging Jędrzejczyk to the mat. Each striking exchange ended with a bull rush to the fence or straight to the mat.

Large portions of the second round were spent with Gadelha riding on one of Jędrzejczyk’s legs as she sat along the fence, preventing the champion from scooting her hips away. A classic stalling position. The problem with grapevining one leg or both legs along the fence and using it to keep the opponent from getting from their butt back to their feet is that you can’t hit with any force. You aren’t punching down on the opponent so the benefit of top ….View full article