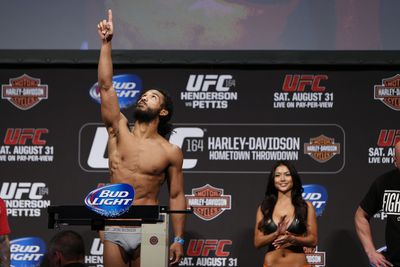 Ideally speaking, Benson Henderson would sign his name to a piece of paper tonight, fly to Orlando and get into a fight next week on national television.

It’s highly unlikely anything of those things will happen, though. Henderson’s contract with the UFC expired after his win over Jorge Masvidal last month, and he’s currently a restricted free agent. The UFC now has an exclusive negotiating window, followed by a span of time where it can match any outside offer Henderson gets.

Henderson thinks the total period of time before he can become an unrestricted free agent is nine months. He certainly does not want to wait that long.

“In a perfect world, I would like to re-sign with the UFC in five minutes or in 10 minutes,” Henderson told Ariel Helwani on Monday’s edition of The MMA Hour. “Or later tonight. As soon as possible. Re-sign with the UFC, get what we feel we’re worth and then fight. I’ll fight in December. If somebody falls out or gets hurt, I’m ready to go.”

The former UFC lightweight champion wants to be back in the promotion in which he made his name. However, it was his wish to be in this free-agent position in ….View original article