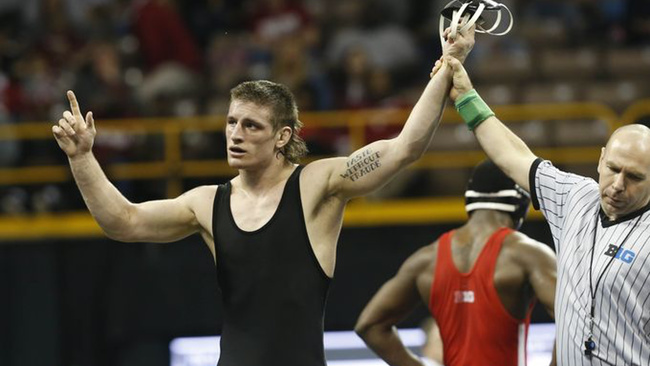 Iowa junior wrestler Sammy Brooks defeated Nebraska’s T.J. Dudley for the Big Ten Championship in the 184 pound weight class on Sunday. After the match, a very sweaty and panting Brooks appeared on the Big Ten Network for a brief interview with Shane Sparks, in which he talked a big game about his hairdo.

When Sparks asked about the atmosphere during the match, Brooks gave all the glory to the mullet:

“Yeah I mean it did get loud in here. I think these fans just respond really well to a good haircut, so that’s what I was working on coming in here, making sure I had it fluffed and feathered the right way, and I think the fans saw my hard work.”

Poor Sparks tried to get the interview back on the rails with a question about consistency and trust, but Brooks was undeterred. “I gain trust every time my hair grows a little more and a little more.” It’s tough to get a good look at the mullet in this interview, so here’s a better view. That’s Brooks on the left:

Whatever your thoughts on the reemergence of the mullet—strangely coinciding with the return of the previously mulleted Jesse Cochrane/Katsopolis—his parting shot, is something that simply cannot be denied: “It’s a process, you can’t grow a great mullet in a day, can’t win a Big Ten title in a day.”

The UFC Enters Partnership With the British Wrestling Association

How the US, Iran, and Russia Came Together to Save Olympic Wrestling