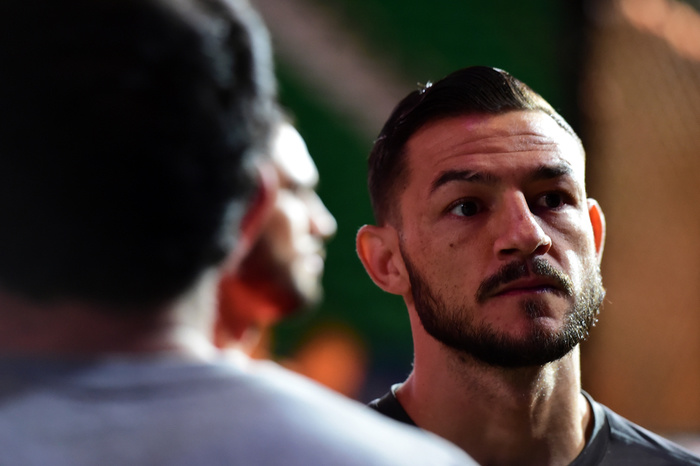 Cub Swanson’s name at the top of the Fight Pass preliminary card was a welcome sight for fans last Saturday, and the bout that played out between the Jackson-Winkeljohn fighter and Tatsuya Kawajiri was endlessly entertaining.

The Japanese veteran looked to stifle the daunting striking flurries of Swanson with his resilient wrestling game. Swanson delivered some devastating shots to Kawajiri, but his durability was outstanding. He’d eat a big right hand and instead of getting buckled, he would launch himself into an outrageous spinning back fist, but more often than not, he would just glue himself to the hips of Swanson and eventually take him down to the canvas.

Swanson was never disheartened, though. The American came out at the beginning of each round and tried to take his counterpart’s head off. Kawajiri gave as good as he got too, snapping Swanson’s head back on a number of occasions.

When it came time to read out the winner of the bout, although the crowd was clearly behind Swanson, it was hard to tell how the judges had scored the bout due to Kawajiri’s endless flood of takedowns, broken up by heavy blows from Swanson.

Bruce Buffer eventually relayed that it was Swanson who got the nod, to the delight of the Salt Lake City crowd, and the win over a fellow top-tier featherweight will do wonders for the confidence of ‘Killer Cub’. His second win since his title aspiring six-fight win streak was shattered by losses to Frankie Edgar and Max Holloway, his previous notions of retirement will be put to the back of his mind.

You only have to look at the top of Saturday night’s UFC offering from Salt Lake City to understand how exciting the featherweight division is at present. The spinning grace of Yair Rodriguez and ….View full article