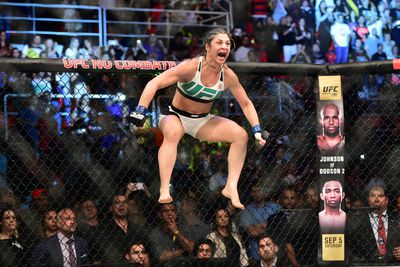 Days after Bethe accused “Evil” of ducking out on a fight between the two of them in order to focus on Hollywood endeavors, Jessica fired back by saying she never turned down anything.

In fact, Eye said via her Facebook page that she will be more than happy to go toe-to-toe against “Pitbull” in spring 2016. In the meantime, she urges the Brazilian bomber to get a warm-up fight and try to last more than half a minute.

Never turned down the fight @bethecorreia you wish that was the reason.You probably should get a warm up fight in & last more than 30 seconds. I will gladly step in the UFC cage with you in the spring! Until then let’s see what excuses come out of that alligator mouth of yours.
Merry Christmas,
-Evil-

And a Happy New Year!

Correia hasn’t stepped foot inside the cage since getting blasted by former division champion Ronda Rousey in under a minute at UFC 190 earlier this year (see it here).

As for Eye, she’s had a rough go as of late, dropping back-to-back fights to Miesha Tate and Julianna Pena. A win over a former title contender like Correia can definitely turn her fortunes around and boost her up the official UFC rankings, as well.

Anyone care to offer up some predictions for this potential 135-pound showdown?