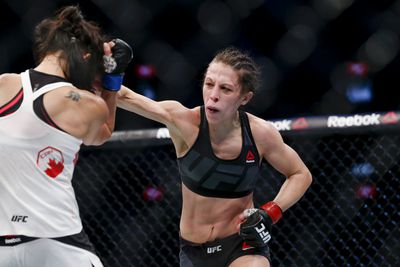 Joanna Jedrzejczyk battered Valerie Letourneau to the tune of 220 significant strikes Sunday afternoon at UFC 193, but despite picking up the win, she couldn’t escape unscathed.

For the second time in as many fights, the reigning UFC strawweight champion suffered a likely hand injury en route to a dominant defense of her UFC title.

“Who’s next? I don’t know. Probably my hand is broken again,” Jedrzejczyk said at Sunday’s post-fight press conference. “I must go to the hospital, but we will see. Probably I will need to take a few more months off, but I will see. It’s all Dana (White)’s decisions. I’m going to fight with everyone, any time, anywhere.”

After starting slow, Jedrzejczyk badly bloodied Letourneau’s right eye and left her opponent’s lead leg a swollen mess to pick up a unanimous decision win (50-45, 49-46 x2) in the co-main event of UFC 193.

The win marked the second defense of Jedrzejczyk’s UFC title reign, which began in March with a vicious upset over Carla Esparza, and continued in June with a even more devastating performance over Jessica Penne, during which Jedrzejczyk suffered a badly broken right thumb.

Due to the lopsided nature of those two fights, ….View original article