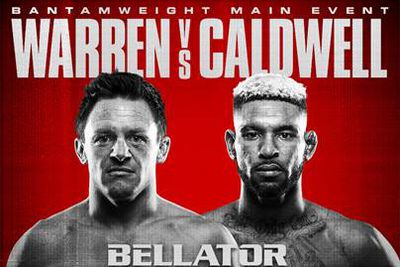 Joe Warren and Darrion Caldwell have a date with destiny on March 4th, 2016 at the WinStar World Casino in Thackerville, Oklahoma.

For the former featherweight and bantamweight champion Warren (13-4), it will be his second bout since he lost the latter title to Marcos Galvao at Bellator 135. Warren got back to his winning ways in his next fight, out-wrestling L.C. Davis over 15 minutes en route to a unanimous decision victory.

Darrion Caldwell has yet to taste the bitter sting of defeat, sporting a perfect professional record of 8-0. At the same event where Warren made his return to form, “The Wolf” submitted fellow collegiate wrestling star Shawn Bunch via rear naked choke in the first round.

On March 4th, 2016 one of two things will happen: Warren will move one step closer to a world title rematch, or Caldwell will keep his perfect record intact and stake his claim at challenging Galvao for the belt.

Of course, if Eduardo Dantas is back from injury before then, he still has a fight with Galvao in the works, and Warren is the man who cost him the bantamweight title.

Things could get very interesting in 2016.