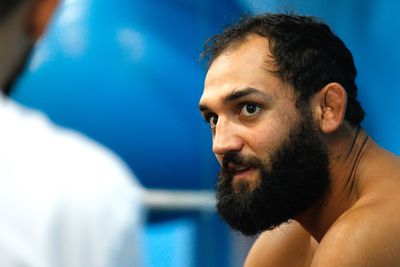 Johny Hendricks was forced out of his No. 1 contender fight against Tyron Woodley a few weeks ago (Sat., Oct. 3, 2015) at UFC 192 after “Bigg Rigg” had trouble shedding the weight to hit the 170-pound mark in Houston, Texas.

Hendricks was forced to take a trip to the hospital only to realize that his intestines had dried up and a kidney stone had set up shop in his system.

While others had plenty to say about the unfortunate situation, Hendricks has kept to himself since the incident. But during his stop by The MMA Hour, the former welterweight champion talked about what went wrong and what his future holds.

“Everything was going good. I was drinking two and half gallons a day and I was walking right around 193, which is normal. Then my body just quit, I couldn’t go to the bathroom. It was was if my body was holding on to everything, which was sort of weird. So we started doing the weight cut, and I was still drinking two and half gallons a day. Then I just hit a plateau where I would feel lightheaded, which is common. I ….View original article