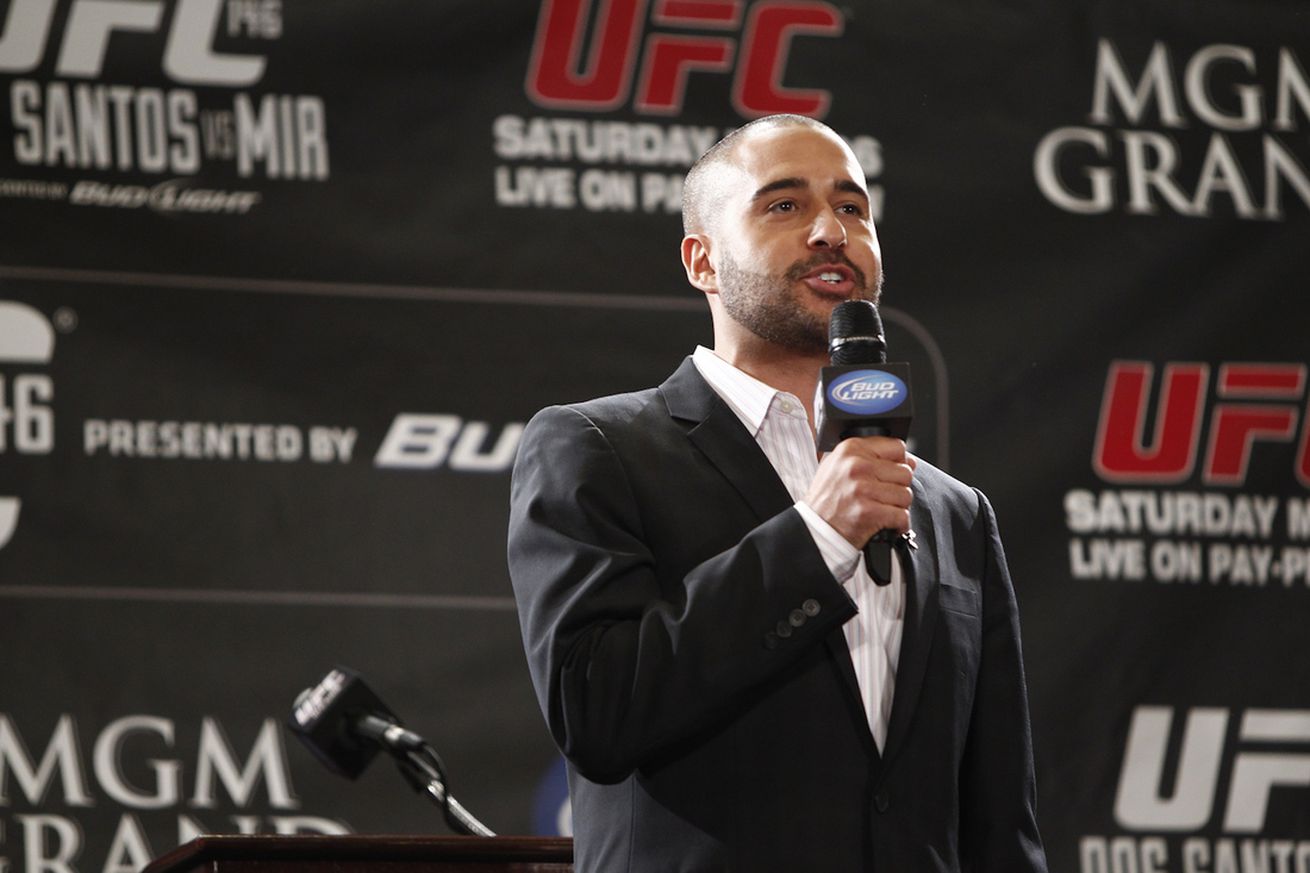 The most recent UFC pay-per-view was a challenging broadcast for experienced UFC play-by-play commentator Jon Anik.

UFC 208, which went down on Saturday, Feb. 11 and was headlined by Germaine de Randamie vs. Holly Holm, was the first UFC pay-per-view following the departure of long-time play-by-play commentator Mike Goldberg in December. Prior to his exit, Goldberg and UFC color commentator Joe Rogan made up the main broadcasting team the UFC used for major events.

In light of Goldberg’s absence, the UFC put together a three-man team with Anik, Rogan, and UFC light heavyweight champion Daniel Cormier to narrate the action for UFC 208. The change marked the first time in recent memory that the UFC used a three-man commentary team.

Reflecting back on the event, Anik called UFC 208 a challenging experience.

“It was a challenging broadcast,” Anik told Ariel Helwani on Monday’s edition of The MMA Hour. “There were a lot of wrinkles that went into it. At least from a pay-per-view standpoint, there was a lot of sponsorship inventory, so I felt like every time I wanted to say something about fighting, you know, our stage manager would hand me a card of Halo Wars 2. I hope they paid the UFC a lot of money this weekend because I felt every word out of my mouth was Halo Wars 2, but it’s an interesting navigation with the three-man booth, particularly for mixed martial arts, a sport in which the line between play-by-play guy and analyst is blurred unlike in other sports.

“There is a lot of real estate there, but it’s not uncommon in MMA to hear an analyst call out a left hand or a combination, so that line is blurred in MMA.”

Some of the feedback fans had for the three-man team at UFC 208 was that Anik wasn’t as active on the microphone as he usually is on other UFC broadcasts. Anik says the reason for him not having as much air time is, in part, because he wanted to give Rogan and Cormier the spotlight. But like most new changes, Anik also believes the three-man booth is a work in progress.

“I did have a sensitivity to Joe and Daniel, and I wanted to make sure, as any good play-by-play would want to do, that those two guys would shine,” Anik explained. “I said when I was going in [to UFC 208], that I was going to air on the side of not saying enough. If there was going to be any criticisms of me after this pay-per-view, it was going to be that I didn’t say enough. And I feel like in the Fight Pass prelims, I started to find my way a little bit and work my way in. But at the end of the day, dude, it’s just not about me, you know?

“It’s about Germaine de Randamie and Holly Holm. And Joe Rogan is brilliant and has such an infectious energy about him. If I take myself out of it, and I put myself in Joe Rogan’s shoes, to his right is the UFC light heavyweight champion of the world and an Olympic wrestler, and to his left is a broadcaster. So if he was leaning to DC early on, or I was letting them have their way, I think that a lot of fans rather hear those two guys.

“I know I heard from a lot of fans saying they wanted to hear more of me, and that’s certainly not a criticism that’s been levied at me in the past. I’m okay with it. I think UFC 209 will be a little bit better and I think it’s a work in progress, and what’s interesting is that we didn’t really have much to work with in these fights. There was one finish and there weren’t a lot of seminal moments to cap necessarily. So it’s a work in progress, but I think we’re happy to have that first one in the can.”

For now, the UFC’s plan is to continue to have a three-man booth for future UFC pay-per-view events. Former UFC bantamweight champion and FOX Sports 1 analyst Dominick Cruz will also participate, joining Anik and Rogan in this new broadcasting team format.