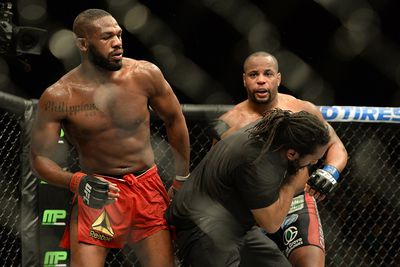 Oh, Jonny. How we missed seeing the true “Bones”.

To be fair, it was a fairly spirited exchange on both sides between UFC light heavyweight champion Daniel Cormier and former titleholder Jon Jones, with each pushing the other’s buttons.

Jones said yesterday that he wanted his UFC title back so badly that he’d fight Cormier anywhere, even in the Oklahoma State University wrestling room.

Not to be outdone, Cormier said he’d fight in Jones’ backyard, agreeing to meet in New Mexico where Jones said he would be for the Jackson Wink’s MMA grand opening. But he added a little barb with the statement.

I’m gonna be there but I need u to make it to the octagon, we don’t wanna violate parole now do we 🙂 @JonnyBones

But Jones wasn’t about to be outdone, responding in kind quickly.

Too pussy to fight at the garden but flies all the way to Albuquerque to prove he’s a man #Scratchingmyhead you on your way pussy?

If you’ll recall, “pussy” is Jones’ pet name for Cormier, which he used to get under “DC’s” skin in ….View original article