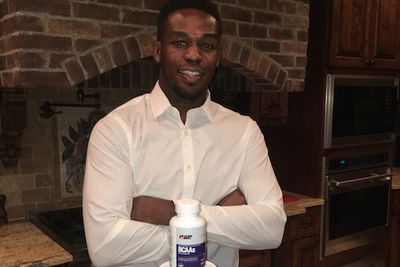 The Jon Jones business is picking up again.

Fresh off the announcement that his UFC suspension had been lifted, Jones has inked a new sponsorship deal with GAT, a leading manufacturer of sports nutrition products.

“I am very grateful to have such a terrific brand like GAT sponsor me as one of their athletes,” Jones stated in a press release. “I look forward to working with TEAMGAT and to taking the GAT brand with me in becoming the number one name in MMA.”

This is a significant milestone for Jones, who lost all of his sponsors, including newly-inked Reebok, following his arrest in April.

Slowly but surely, though, Jones has reemerged on social media, and while he has yet to do any interviews about the incident that led to his arrest earlier this year or his plea deal, it’s clear that he is already gearing up for his comeback fight against Daniel Cormier later next year.

He’ll now be doing so with a new sponsor by his side.

“I was thrilled when Malki Kawa called me to discuss TEAMGAT expanding to include MMA athletes and signing Jon Jones as our first,” Mark Post, ….View original article