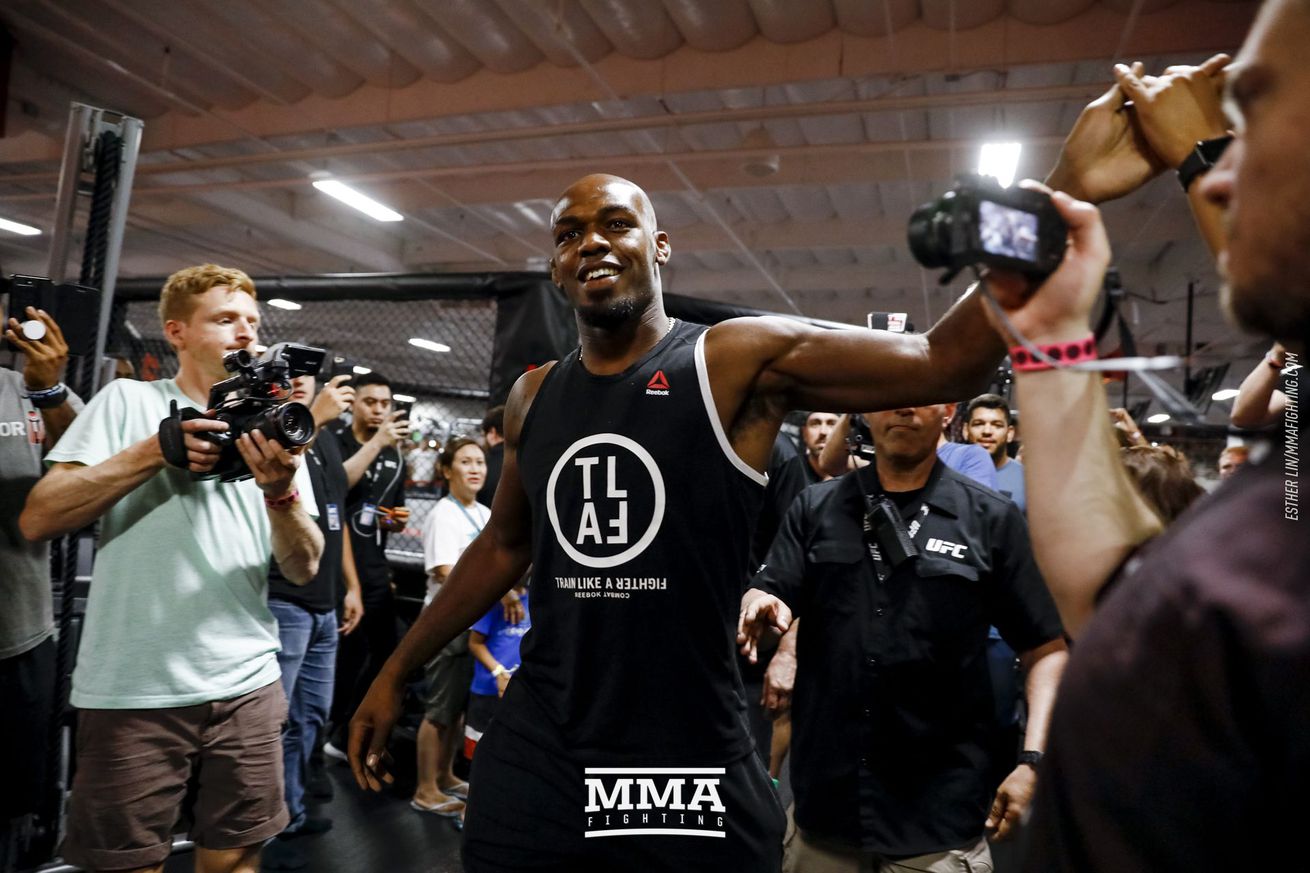 Though we haven’t seen much of Jon Jones in the last two-and-half-years, there’s been just enough of him out there to sense a refinement in grudges. Given all that time off for reflection, it appears “Bones” did his fair share. The beleaguered champ that’s in Anaheim to fight Daniel Cormier is fresh-faced at 30 years old, (probably) wiser, (mostly) motivated by his legion of haters. He’s sporting a shaved head and a goatee and tossing casual expletives about, no longer given over (entirely) to issues with his image.

And he sure as hell isn’t trying to buddy-up to long lost pals like UFC president Dana White, whom he said he has cold-shouldered since last year when his fight at UFC 200 fell apart last minute with a flagged drug test. He told the Los Angeles Times Lance Pugmire that he believed new owner Ari Emanuel of the WME-IMG conglomerate was his boss, not the guy that said he’d never trust Jones in another main event. Why? Because through all the red tape and orange jump suits, White didn’t have his back.

“I just feel like when you’re making the company money and you’re a pay-per-view draw and you’re ultimately putting money in his pocket, then you mean a lot to him,” he said. “The moment you aren’t those things, you mean nothing to him, and he’s done a decent job of showing that. I felt completely abandoned by him…in a situation when I needed him the most.”

See, sometimes the fun of fight week is trying to fish out whatever is seething underneath. Especially in Jones’ case. Jones isn’t arguably the best fighter the UFC has ever known, his greatness at this point is just a statement. Yet abandonment is one of the tenured catalysts in fighting’s long history. The old truth is that coaches don’t make fighters, jilt does. In Jones’ case, it’s evolved motivation for a guy who has used up whatever got him there originally. The questions as to whether he’s a changed man from the Party Dude Who Nearly Threw It All Away will linger for the rest of his career, but Jones has always known how to find his own incentives.

Either you were with him through his hard times. Or you weren’t.

And now White is part of that incentive. As are all the haters out there who’ve enjoyed watching Jones fail to get out of his own way again (and again). The Jones of today freely talks about that troubled version of himself — the one that was stripped of his title for a hit-and-run during his first second chance tour and then stripped of his interim title during his third chance moment for testing positive for a banned substance — but accountability is a word that takes time to get the gist of. Does Jones truly hold himself accountable for his own actions? You’ve got to take him at his word that he does.

In the meantime he’s keeping a list of those who’ve been keeping a list. At Wednesday’s press conference he shut down a question from a media member who asked him about the extreme highs and lows of his youthful 20s, because, well, he didn’t like the reporter.

One of the people Jones is actively downplaying as having any effect on him whatsoever is Cormier, whom he beat at UFC 182 in 2015. It’s fitting that Jones should get to fight Cormier not just in his first fight back from a yearlong suspension, but in his first ever rematch. Cormier has made a cottage industry out of Jones’ character flaws. He’s turned Jones into the sport within the sport. Outside of perhaps Alexander Gustafsson, nobody ruffles Jones’ feathers as easily — or as persistently — as Cormier, who is wearing a belt that Jones never relinquished in the cage.

It’s the perfect psychological fight for a guy with so much to regain. Yet Jones isn’t leading on. He said Cormier wasn’t the Frazier to his Ali when asked about it, but rather “whoever it was that Ali beat twice.” If there are people out there that have bothered him during his time away, Cormier isn’t one. The opposite is probably true, but Jones is an expert in opposites.

“It’s weird when it comes to me and Daniel, because at the end of the day I see who he is,” he said during a scrum on Thursday. “I think he’s a f*cking great guy. I really do…he’s funny. He has good friends and sh*t. He’s a f*cking good dude. And so I want the best for him, I really do.”

Haters be damned, though he has fought just once in 30 months Jones has never stopped believing that everyone — Dana White, the media, his haters, and Daniel Cormier — are living in his times.

“I wish he was just man enough to realize he’s f*cking around with the wrong era,” he said. “He’s just so happy to come into this sport, he’s 39 years old and he’s f*cking with a guy who is in his prime. A guy who honestly believes that this is his era and does everything in his power to make sure that it’s his era. And if he could just swallow that and say, ‘you know what, I’m the baddest motherf*cker outside of Jon Jones,’ then I can go to sleep with that. Because I’m still a bad motherf*cker.”