Home MMA News Jon Jones: UFC was ‘very well aware’ Vitor Belfort was on steroids when I fought him
ShareTweet 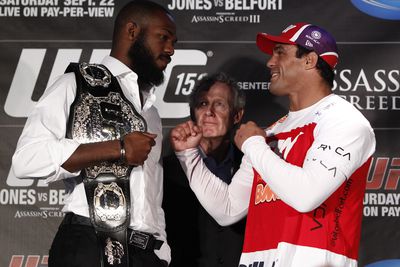 Deadspin reported in September that Vitor Belfort had a sketchy drug test result weeks before a fight with Jon Jones at UFC 152 in September 2012. Belfort appeared to have elevated levels of testosterone. The numbers, though, were never reported and the main event fight went on as scheduled.

Jones didn’t know about the test until the Deadspin report came out. He’s not surprised about Belfort, a rumored performance-enhancing drug user for years. However, Jones told Ariel Helwani in a sweeping interview last week for MMA Fighting that he is upset the UFC knew before the bout and didn’t do anything about it.

“I remember at the weigh-ins, I looked at his abs and I’m like, dude, I’m like several years younger than you and you look way tighter than me,” Jones said. “And I knew I trained pretty hard for that camp. Everybody has always speculated Vitor for being on steroids. But to know they put me in there with him knowing he was on them, it’s really a slap in the face.”

At the time, Belfort was on testosterone replacement therapy (TRT), which was legal before a February 2014 ban. Belfort supposedly ….View original article