Home MMA News Jon Jones: UFC wouldn’t have stripped title if I had been ready to fight Anthony Johnson
ShareTweet 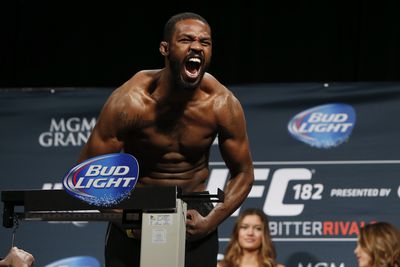 The narrative has been passed along often over the last seven months. UFC president Dana White and CEO Lorenzo Fertitta went down to Albuquerque the day after Jon Jones’ arrest. Later that day — April 27 to be exact — White went on Fox Sports 1 and announced that Jones would be suspended indefinitely and stripped of his UFC light heavyweight title due to the felony hit-and-run charge.

Most figured White and Fertitta flew to New Mexico to tell Jones the bad news in person and see how he was doing. That is not how Jones views the series of events.

“Bones” told MMA Fighting’s Ariel Helwani in an hour-long, in-depth interview last week that he believes there would have been no suspension or title stripping if he was willing to fight Anthony Johnson as scheduled at UFC 187 in May, four weeks after his arrest.

“Obviously, they would have the power to say differently, but I really have a feeling that if I was ready to fight, they would have let me fight,” Jones said. “Especially because there was no court date. I wasn’t proven guilty of anything at the time. I feel as if ….View original article