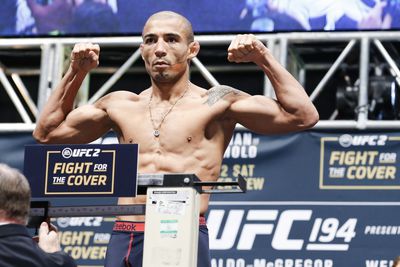 Jose Aldo will enter the Octagon for the ninth time tonight to defend his featherweight title against Conor McGregor, and won’t plan fighting much longer.

The first and only undisputed featherweight champion in UFC history faces “The Notorious” at UFC 194, and doubts he will fight until he’s 35.

“I wouldn’t say I think about retirement,” Aldo said during a media day in Brazil, before fliying to Las Vegas for the event. “I think about financial stability. When I have it, I will stop. I don’t care if I’m at the top or not, I don’t care. I don’t want to fight until I’m 40. I don’t even know if I’ll get to 35. I don’t think about this. What I want is to leave this sport as champion. I want to be the only featherweight champion. That’s when I’ll leave the sport.”

Aldo turned 29 in in September, and celebrated his sixth year as featherweight champion on Nov. 18, six years after beating Mike Brown to win the WEC championship.

“Man, I’m old,” he joked. “I think (my life) has changed a lot, especially my hair, I’m getting bald. I’m six years older, and I think I’m more experienced today, and that probably helped. But it hasn’t changed much for me. I’m still the same person, having the same dreams, same visions, and the same mission since that day.”

“Tomorrow, when I’m not here, you will always wonder who would beat me when I’m not around anymore. That’s what I want,” Aldo said. “Just like Georges (St-Pierre) left. The division is still wide open, no one was able to dominate it, and everyone remembers him. That’s how I want to leave the sport.”