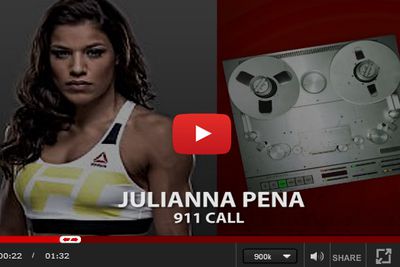 You know how Julianna Pena gets when it comes to security.

The Ultimate Fighting Championship (UFC) women’s bantamweight contender Pena was arrested and charged with two counts of assault last month for her role in a physical altercation outside a watering hole in Spokane, Washington (read our original report here).

As you might expect, TMZ got a hold of the 911 audio from inside the bar (embedded above).

Manager: “They’re like, trying to break in the doors and shit, they’re rubbing their bloody faces on the door, and all…[unintelligible]”

Dispatcher: “They’re rubbing their bloody faces on the door?”

Dispatcher: “How many subjects are there?”

[yells at someone, takes off]

The second caller was an employee making a request after the manager had stepped outside and the confrontation turned physical.

Dispatcher: “How many people are involved?”

Employee: “One female, three males, and then our two security guards and the owner of the building. They’re professional fighters, they’re gonna fuck shit up. Sorry for my language.”

The police report states that Pena and Sikjitsu training partner Josh Gow had “obviously been drinking.” In addition, the “Venezuelan Vixen” is accused of nut-shotting the bar owner and a member of his staff, who attempted to block her and Gow from entering his establishment.