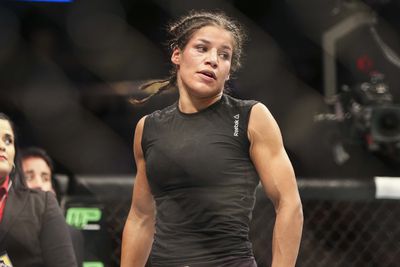 “Sometimes these things happen in MMA!”

The UFC 193 pay-per-view (PPV) and mixed martial arts (MMA) mega event is expected to attract a record-setting crowd inside the 70,000-seat Etihad Stadium in Melbourne, Victoria, Australia tomorrow night (Sat., Nov. 14, 2015) and no other spectator may be as interested in the result of the women’s bantamweight title fight main event pitting champion Ronda Rousey (12-0) against the No. 7-ranked Holly Holm (9-0) than surging contender Julianna Pena (7-2).

“The Venezuelan Vixen” is currently on a three-fight win streak and most recently thwarted a tough Jessica Eye at UFC 192 one month ago. Having won The Ultimate Fighter (TUF) 18 on Rousey nemesis Miesha Tate’s team, a season in which the former was a coach, Pena has spent time closely analyzing the career of “Rowdy.”

And she’s ready to jump at the chance to stake her claim to fight for the 135-pound belt.

“You could potentially see me jumping in the cage, we’ll see,” Pena told Ariel Helwani. “I need them to have their security ready because I’m going to go H.A.M. after this fight. I don’t care who the winner is, I want the belt. I don’t care who has ….View original article