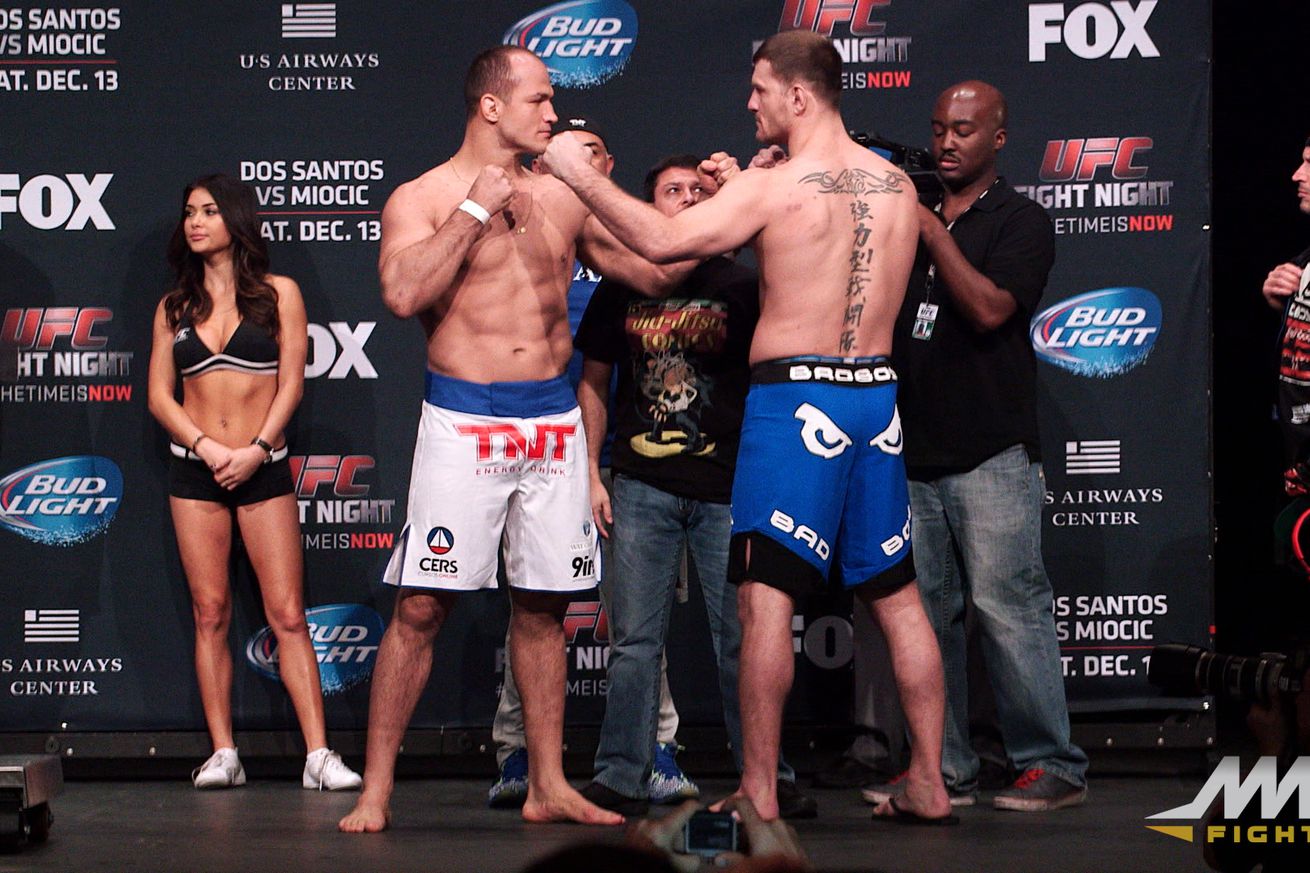 The former champion will headline UFC 211 in Dallas, Texas, on May 13, and feels “more mature” as he approaches his first fight of 2017 — and he’s not bothered by the fact that he hasn’t fought since April 2016.

Fighting for UFC gold is not the only thing that motivates the Brazilian heavyweight ahead of his return to the Octagon. Dos Santos’ wife Isadora gave birth to their first son on March 10, and Bento already changed his father’s life.

“I’m already feeling really, really different,” dos Santos said. “Things are changing. My objectives, my goals in life are changing. So now it’s all about my son. I can’t wait.

“It’s not just me now,” he continued. “I have my wife, now I have my son. Things are a little different but it’s good because it makes me feel, gives me more motivation. That’s motivation to train hard. I’m feeling happy. You know, I was already a happy guy, but I’m even happier with everything. I think it’s going to be very positive for my training camp.”

Speaking of training camp, “Cigano” was originally scheduled to face Stefan Struve on Feb. 19, but the Dutch fighter pulled out with an injury. As a result, the UFC gave the Brazilian a shot at the heavyweight champion instead.

Dos Santos wasn’t really surprised, he explains, because everyone else turned down fights against him in the last few months.

“I was thinking about that during my preparation because when I heard that Stefan Struve was injured and he should pull out of the fight, I was thinking about that,” he said. “And then we had many guys denying to fight me, so I said man, probably they will give me the title shot because nobody wants to fight me now. Miocic will have no other option, you know? I’m glad that happened. I have the feeling I’m facing the best heavyweight right now, Miocic, and I’m very excited about that because I like big challenges.”

Dos Santos worked his way up towards another shot at the gold after two losses to Cain Velasquez in the past, when many people thought he would never get to this position before. But “Cigano” never thought like that.

“I’m just 33 years old now, you know. I have a long time to be fighting still, so I knew I could regain my chance to fight for the title, and it’s happening now,” he said. “I can tell you, all these guys from heavyweight division, they know I’m the real deal here. I’m not playing here. I’m taking this very seriously and I have enough skills to be the No. 1.

In the “moment of truth,” dos Santos has to repeat history and beat Miocic a second time, and he expects a tougher opponent compared to the first time they fought in 2014, when the Brazilian won a close decision after five rounds.

“He did very well in that fight, that was a hell of a fight we had, and, man, I’m not surprised that he’s knocking all these guys out,” dos Santos said. “He hits very hard. I told you, I have this feeling I’m fighting against the No. 1 guy right now, the best heavyweight in this scenario now.

“I’m fighting against him, and that’s motivation because I know many things happened in the past, but now things are different. This guy is reality for this division, so that’s why I’m training so hard and taking this very seriously because I know I have a very tough opponent to beat.”

Dos Santos, who ate some brutal shots when he faced Miocic at UFC on FOX 13, already watched the five-round battle a few times since the UFC called him offering the rematch for the UFC gold.

“My gosh, I watched that (fight) many, many times,” “Cigano” said. “Last time was two weeks ago, something like that. Sometimes I take a look because after they told me that I was fighting him again, I was taking a look again in our fight, his last fights too, because we need to study him now a little bit better. He’s hitting a little harder now [laughs], so that makes me very excited.”