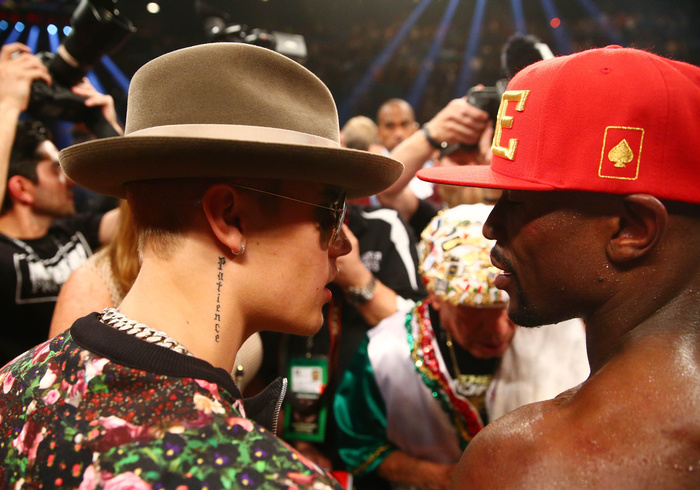 On Sunday, “What Do You Mean” singer and new MMA fan, Justin Bieber, grieved Conor McGregor’s unprecedented loss to Nate Diaz in a series of posts to his Instagram. The heartbroken pop sensation posted a photo of McGregor that called him a “champ” in lieu of his loss, followed by a video post where he quipped that Diaz’s style was “terrible.” Diaz has since responded with a post of his own, calling the heartthrob, and qualified analyst, a “hater.” We trace the impressive history of Floyd Mayweather’s cornerman’s almost-fights.

March 6, 2016: Bieber calls UFC superstar, Conor McGregor, the “champ,” following the Irishman’s loss to Nate Diaz. He follows the post with a video in which he toasts to McGregor, expressing his grief. The video caption reads, “No bandwagon but Conor is a true champion, fights with style and finesse, all the respect to Nate but his style is terrible. Nate has crazy heart respect.”

December 13, 2015: A photo posted to Instagram ignited rumors surrounding Bieber’s alleged hookup with Keeping Up With The Kardashians star, Kourtney Kardashian, inciting a feud between the Biebs and the “Lord.” An unnamed Disick Insider reported to The Hollywood Gossip that Bieber “needs to make sure he keeps his distance from his kids,” or else “Scott will come after him.”

September 12, 2015: An MGM Grand security guard squares up with Floyd Mayweather’s cornerman after confusing him to be an obnoxious fan. A video posted by TMZ shows the Biebs being consoled by a fedora-clad gentleman following their near-scuffle.