Home MMA News Kevin Lee says he was the one ‘robbed’ at UFN 112, because Michael Chiesa didn’t put up a better fight
ShareTweet 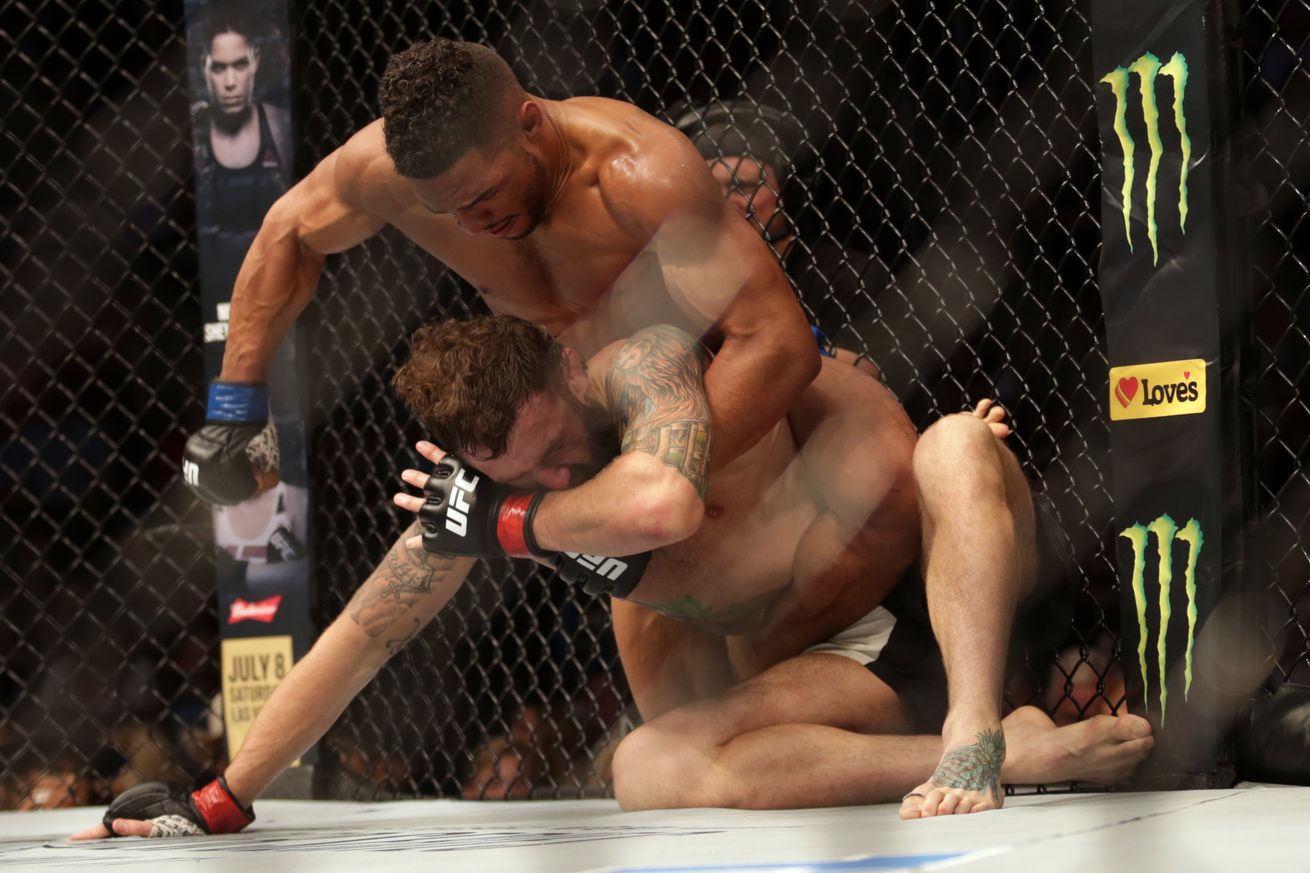 Kevin Lee doesn’t think Mario Yamasaki robbed Michael Chiesa on Sunday night. He believes he was the one robbed — by Chiesa.

Lee won by submission in the main event of UFC Fight Night 112 in Oklahoma City. But there were controversial circumstances. Yamasaki, the referee, called the fight despite Chiesa never tapping out or going unconscious at 4:37 of the first round.

Chiesa was livid afterward and called for a rematch. Lee, however, played it off.

“I was robbed by Mike,” Lee said on the FS1 post-fight show. “I thought Mike was gonna put up a better fight. I trained hard for this fight. I trained like a championship fight. I thought it was gonna go all five rounds, I was prepared for it. I had my mind mentally set for it, so I was looking forward to that. I was looking forward to showing some more wrinkles in my game. I slipped and he got half a takedown, but once I felt him on top, oh, it was like I knew it was game over.”

Lee (16-2) slammed Chiesa to the mat, got his back and worked for the choke for the better part of the first round. He cinched it in late and it’s possible Chiesa would have gone out, but he didn’t seem to, popping up as soon as Yamasaki called it. Lee believes Chiesa went limp and if he didn’t it wouldn’t have mattered anyway.

“Going back and watching the film, he definitely went limp,” Lee said. “He was fighting the choke, I switched, I stayed choking with one arm, I switched to palm to palm. As soon as I did, his arms stopped fighting the choke. He goes limp. I let go when Mario told me to stop. I’m not a dirty fighter. I’m very smart, I’m very aware.

“I don’t even know if he knew he went limp. If he didn’t, it would have been just another 45 seconds of me choking him even more and it would have led to brain damage. I’m glad that Mario stopped the fight.”

UFC president Dana White also went off on the stoppage on social media, slamming Yamasaki in a blistering post.

Mario Mazzagatti does it again!!! This guy is more concerned with doing this dumb ass heart bullshit then Ref’n the fight!!! Steals a great moment from Lee or let Mike fight it or tap. Nobody gives a shit that u can make a heart with ur hands like a 12 year old girl they want u to pay attention to what’s going on in the fight and do ur job.

Lee, though, said he’s ready to move on from this rivalry with Chiesa, which was marked by a press conference scuffle last month when Chiesa became irate when Lee brought up his mother.

“The only reason I would entertain a rematch is because it’s easy money,” Lee said. … “Otherwise i’m moving onto Khabib [Nurmagomedov]. I’ve already got my mind set on that one. That’s the one I’m looking for.”

Nurmagomedov could be looking at a fight with Tony Ferguson next for an interim title with Conor McGregor, the lightweight champion, boxing Floyd Mayweather in August. The division is very much in flux. But Lee, 24, has won four in a row and nine of his last 10. He’s very much in the mix, even fans won’t be satisfied with his victory Sunday night.

“The only thing I’m disappointed in is I just didn’t get to show more,” Lee said. “I was expecting a little more fight out of the boy. It would have been just another four more rounds of that, so I was kind of looking forward to the four more rounds. That’s what I’m most disappointed about.”