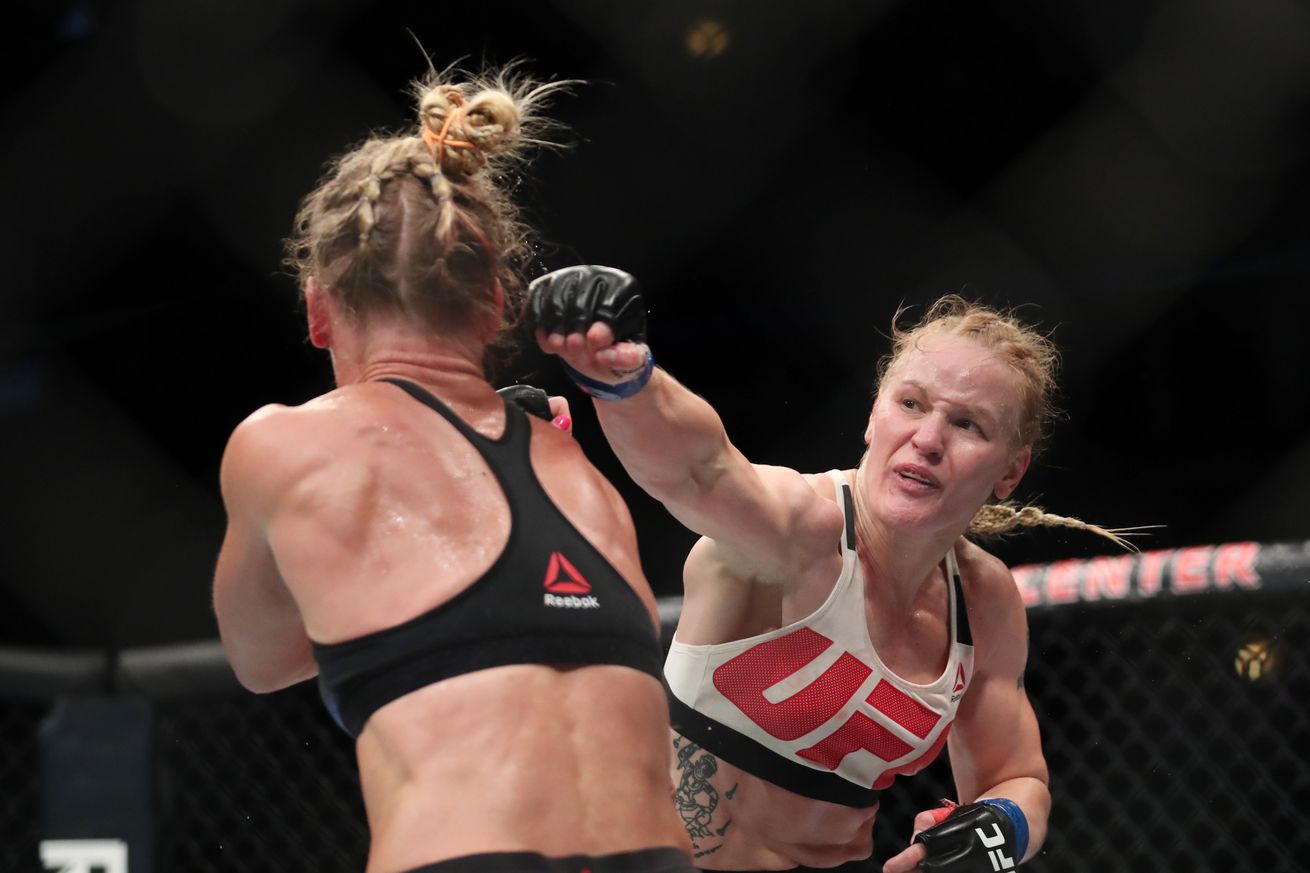 Two of the best female fighters in MMA today will square off later tonight (Sat., Sept. 9, 2017) at UFC 215 live on pay-per-view (PPV) from inside Rogers Place in Edmonton, Alberta, Canada, as UFC women’s bantamweight champion Amanda Nunes puts her 135-pound title on the line against top contender Valentina Shevchenko in a highly-anticipated main event.

Remember, Nunes beat Shevchenko back at UFC 196 via unanimous decision, but ultimately looked gassed and depleted in the third and final round of that meeting. The two were also scheduled to headline UFC 213 this past July, but “Lioness” pulled out due to illness.

In order to prepare ourselves for the impending rematch and understand what each fighter brings to the table, let’s take a closer look at the keys to victory for both Nunes and Shevchenko.

Despite winning her first tilt opposite Shevchenko last year, Nunes revealed holes in her conditioning late into the fight. Her efforts earlier in the bout to put her ahead on the scorecards and ultimately capture her a decision win understandably came at a cost. Nunes was running on empty after the first two rounds and allowed “Bullet” to regain momentum in the final five minutes.

This time around, Nunes will have to get past Shevchenko for a total of five rounds (assuming the fight doesn’t end earlier). While “Lioness” may have improved her conditioning over the past 16 months, she will still have to pace herself more than usual to make sure she doesn’t fade late at UFC 215.

Shevchenko has never been finished outside of an illegal upkick back in 2010, so she is tough as nails. Holly Holm had five rounds to pick the Russian apart and failed miserably. If Nunes wants to harness her best chance to defeat Shevchenko and retain her title she’ll have to conserve energy early, intelligently pick her shots, avoid lifeless tie-ups, and do everything in her power to maintain momentum in the championship rounds.

As good of a striker as Nunes is, she’s incredibly dangerous on the ground. The Brazilian jiu-jitsu black belt holds submission wins over former UFC champion Miesha Tate and Olympic wrestler Sara McMann, and is more than capable of choking out any fighter in the division today. Nunes is obviously at her best when she’s slinging leather on the feet and pressuring opponents into making mistakes, but the champion is slick when the action hits the canvas.

In their first matchup, Nunes was able to take Shevchenko down on two separate occasions, land noteworthy ground-and-pound, and successfully pass guard four times. With that kind of success throughout a three-round fight, the Brazilian would be crazy not to rely on that part of her game to try and chip away at “Bullet” over the duration of 25 minutes.

1. Early bird gets the worm…

Shevchenko may be considered more of a patient fighter than a slow starter, but she’ll have to turn the heat up early nonetheless at UFC 215 opposite Nunes. After going through their first meeting and unloading all of her efforts late into the fight, “Bullet” knows all too well that she can’t allow Nunes to get off to a fast start.

Instead, Shevchenko is the one who must land early, score in bunches, inflict some damage, and take control of the action. She’ll obviously have two more rounds to work with compared to last time, but the Russian striker must find her groove quickly if she wants to set herself up for success down the line.

Of course, Nunes is a monster in the first round when it comes to finishing fights so Shevchenko needs to push forward with both aggression and caution.

Shevchenko showed tremendous counter ability in her five-round clash with Holm back in 2016. Holm is easily one of the more technical strikers in the women’s bantamweight division and “Bullet” forced her to fight out of her comfort zone and revealed holes that previously weren’t there.

Luckily for the challenger, Nunes is a rangy striker just like Holm and is more than willing to strike first to see what happens. To take full advantage of this, Shevchenko would be smart to hang back in the pocket until it’s time to leap in for a counter. Once she’s able to bypass Nunes’ two-inch reach advantage and squeeze her way inside she should look to open up with her Muay Thai and score points in bunches.