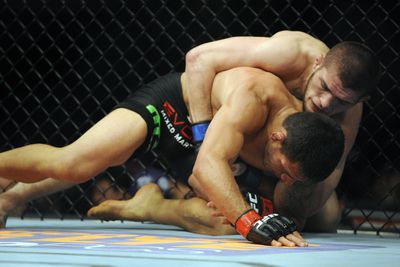 Everyone who tuned in Thursday morning (Oct. 29, 2015) and learned that UFC lightweight Khabib Nurmagomedov had gone and injured himself again probably did what I did: you raised your head to the sky and began a slow and dramatic Darth Vader scream, “Nooooooooooooooo.”

MMAFighting.com’s Ariel Helwani first broke the story, that Khabib had sustained a rib injury while training in Dagestan, Russia.

Yesterday, his dad and coach, Abdulmanap Nurmagomedov, posted his disappointment on Facebook (via Bloody Elbow and translated by Artem Safarov):

“This injury is a very unpleasant situation,” said the renowned Dagestani coach. “We tried to figure out how to train and avoid injuries, not to disappoint our fans. But we failed. Khabib stopped a takedown while working in sparring when he got injured. We couldn’t force everything.”

So, what went wrong? According to Daddy Dearest, too much effort was spent on Khabib’s celebrity, flying around Russia to meet youth and entertaining guests in their family home.

Abdulmanap said that isn’t “a proper regime” for training.

The worst part? The injury happened just one day prior to his flight to San Jose, California, where he would have finished out his 42-day training camp at his American Kickboxing Academy home.