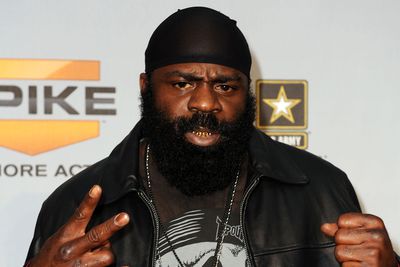 Kimbo Slice is not having a bad 2015. His return to MMA has been a promotional success for his Bellator and on Spike TV. And while competitively his win over Ken Shamrock isn’t particularly noteworthy, it’s made the heavyweight relevant as an attraction years after his entrance and first exit from the sport.

“It felt good,” Slice told Ariel Helwani on Monday’s The MMA Hour, regarding his return to the cage. “You kinda miss it. You know what to expect from it. You just build up a confidence level know because all those years you f–king learned to love the sport. What I took for granted back then, I kinda embrace now, which is the ground game.

“I added more into a workout rather than just standing up, f–king someone holding pads and going through that ritual,” he explains. “I can do that with my eyes closed. I can do that in my sleep. What’s still a little new is that ground. With everything, you still can learn different s–t from it. No matter how much you train in it, you still find yourself learning something different.”

The admission is something of a curious one. Slice was nearly choked unconscious in ….View original article