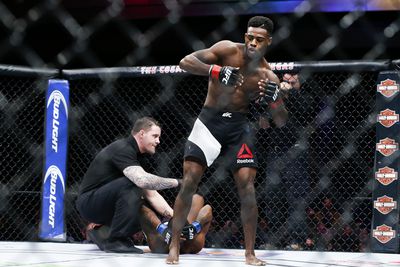 Muhammed Lawal was in the locker room at UFC Fight Night 80 earlier this month with teammate Antonio Carlos Junior. “King Mo” had heard about rising prospect Aljamain Sterling, but that was the first time the two met.

Lawal asked Sterling if he was the co-main event of the card. Sterling told him he was on the prelims. “Mo” was floored and, later, pretty captivated by Sterling’s performance in a second-round submission win over Johnny Eduardo.

“It wasn’t even a close fight,” Lawal told MMA Fighting. “When I watched the fight, Sterling was fighting in like the first gear. He wasn’t even fighting hard. He was out there like ho humming, playing. Then when he hit the dab, I was kind of impressed. He’s got a big personality. He’s got energy. I don’t see why they don’t push him.”

The undefeated Sterling (12-0) has emerged as one of the best bantamweights in the world. And now he’s a free agent. Sterling’s manager Malki Kawa told MMA Fighting’s Ariel Helwani after UFC on FOX 17 that Sterling is free to seek offers from other organizations, though the UFC has the right to match.

Bellator will surely be interested; Lawal is hoping his promotion is a real player. “King Mo” has become a fast fan of the “Funkmaster.”

“I can listen to this dude do interviews all day,” Lawal said. “He’s slick. I just hope Bellator makes a move for him. If they do, I hope it’s a good amount, so if the UFC matches it or pays more he can get more money. I want him to get paid.”

Lawal, who fights in the Rizin Fighting Federation heavyweight tournament next week in Japan, believes that Bellator has the kind of roster that would make for a good fit for Sterling. ….View full article