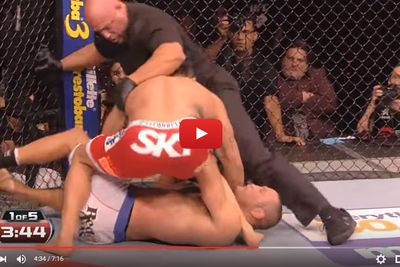 Adding insult to injury, Belfort was popped for steroids in the wake of his defeat and fled to Europe to compete for Cage Rage. Henderson, meanwhile, went on to squash Wanderlei Silva at PRIDE 33 before signing a new deal with Ultimate Fighting Championship (UFC).

Where he would eventually grant “The Phenom” a rematch at UFC Fight Night 32 in late 2013.

Cory Braiterman with the enthusiastic play-by-play:

A minute has passed and nothing has been thrown. Then literally a second later at 3:59, Dan jumps in and was either off balance or got hit by a short right and goes down. Belfort is swarming on Hendo, but Hendo isn’t out of it and is climbing up. Hendo stands and IS PUT TO SLEEP BY A HEAD KICK! HE WON BY ANOTHER HEAD KICK! HOLY CRAP HENDO’S JAW FINALLY GOT CRACKED!