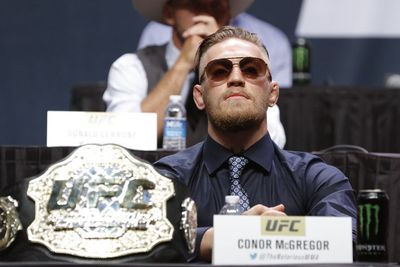 Conor McGregor has already declared war on the Ultimate Fighting Championship (UFC) Lightweight division, vowing to claim the 155-pound strap as soon as he clears out the Featherweight class.

While some Lightweight standouts would welcomed his move up, current division kingpin, Rafael dos Anjos, isn’t taking the Irishman’s threats serious. That’s because he doesn’t take “Notorious” all that serious.

Because as “RDA” recently told FOX Sports, McGregor is simply a “small man” who he would easily crush.

“I don’t care about (Conor) McGregor. He’s a small guy, I would crush him. If he wants to take my title I would love to crush him, but right now I don’t think he’s a big challenge. There are bigger names to beat.”

It’s something you won’t see the Brazilian champion doing — he’s more concerned with fighting top competition and earning his stripes rather than cashing big checks and taking an easy road.

“I have honor on my belt. Not a fake belt. I have a real belt because I fought against the best. That’s why I think for me it’s ….View original article