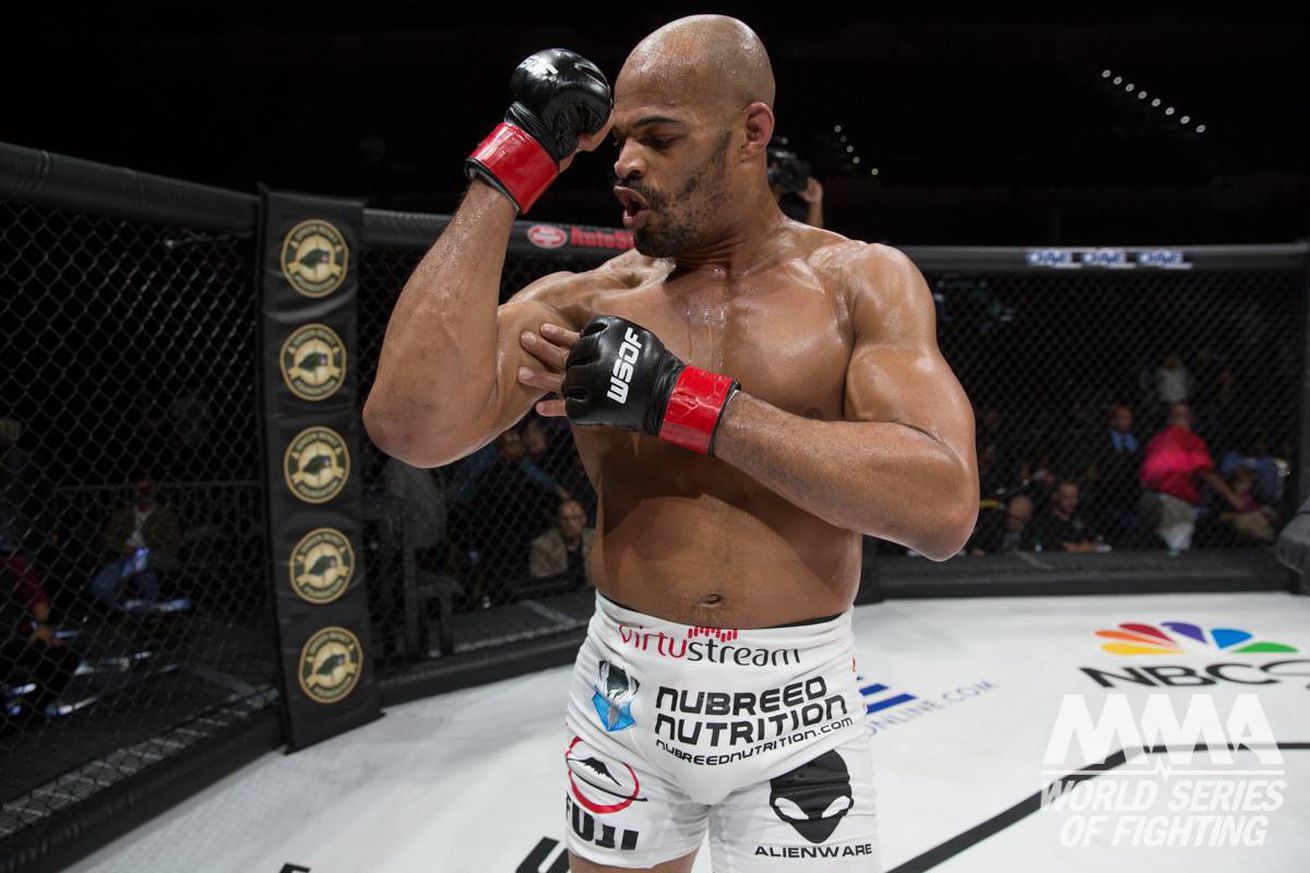 It’s not everyday that a two-division champion from a national MMA promotion becomes a free agent, but that’s the case with David Branch.

Branch was the reigning middleweight and light heavyweight champion with the World Series of Fighting — was because the 35-year old Bronx native said on Monday that he was granted his wish to be released, and is therefore free to sign wherever he wants.

“I’m definitely a free agent now, I’m officially a free agent,” he said during an appearance on The MMA Hour. “I’m going to be looking to explore my opportunities on the outside of WSOF. And I think it was about time for me and the company to just split ways. There was some misunderstandings that happened, and as a result of those misunderstandings it was best for me to be released and stuff like that. Plus I just want to do other things.

“I think one of the big things that people — people and the media, and to myself, you know I’m 35 years old right now and at the end of this whole fighting career, and I’m a two-division champion and all that — but people will always say, ‘well he didn’t do it in the UFC.’ Well you know, here’s the deal. I’m a free agent now. People have been saying for years that I’m the best fighter on the outside of the UFC. I disagree. I believe that I’m the best fighter in the world. And I think that now is my opportunity to be able to prove that.”

Branch is coming off a middleweight title defense over Louis Taylor at WSOF 34 (submission, fifth-round rear-naked choke), which was held at the Theater at Madison Square Garden on Dec. 31. Before then he successfully defended his 205-pound title against Vinny Magalhaes at WSOF 33 in October.

His reason for asking to be released from WSOF while still riding so much momentum was because he wanted to expand.

“I’m no longer a part of the company because it’s just time for me to grow,” he said. “It’s time for me go and just do bigger things. It’s time for me to have bigger challenges for myself, there’s no more challenges left for me with WSOF. I’ve just accomplished everything that there is for me to do there. It just comes time for an athlete to move on, and I think that this is my time right now.”

WSOF president Ray Sefo confirmed to MMA Fighting on Monday that Branch is indeed a free agent, saying, “It’s true David is a free agent, and I wish him the very best.”

Asked what the “misunderstanding” was between him and the WSOF — particularly since Branch had been sending out tweets to suggest some dissension in the ranks — Branch was reluctant to provide details.

“It was just one of those things where, sometimes it’s just time for you to go, you know what I mean,” he said. “I had all the cues, all the signs that were there for me to light the fire and get up and do what I have to do. I’m not going to stay anywhere I’m not comfortable, and I think it was just time for me to up and leave, to just relinquish my belts here on your show today. It’s a big thing, that’s what I’m doing.

“I’m no longer middleweight champion, or light heavyweight champion for World Series of Fighting, I’m relinquishing the belts today. That is official. And I want to give the opportunity for some more new and young talent to go into the World Series of Fighting, and I hope that they do well. And I hope that they have some really colorful champions, you know?”

When host Ariel Helwani mentioned a specific tweet that Branch sent out, in which he said he was “threatened” during fight week, Branch again balked at the chance to explain what he meant, explaining that sometimes a fighter’s emotions get the better of him.

“Here’s the thing, it was just a lot of things that went on that night, and like right now…it’s just really complicated,” he said. “If I’m coming into a show, okay, and I’m coming in to fight my opponent, that should be the only opponent I have to worry about fighting. I shouldn’t have to worry about politics, I shouldn’t have to worry about all these other things. I’m not going to go into details, but these are somethings the things fighters have to face. My reasons for leaving are a bit similar. I’m not going to go into detail, but that’s just one of those things that happens. This is the fight game. It gets crazy sometimes. Sometimes promoters have problems with fighters, and sometimes fighters have problems with promoters.”

Branch said he hadn’t inked a deal with the UFC yet, but that’s the direction he’s looking at.