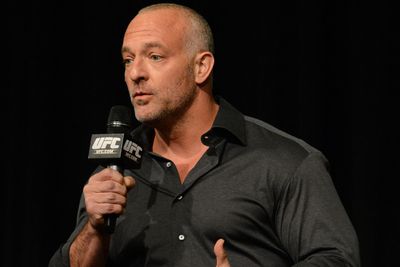 Move over Crazy Eddie, Lorenzo Fertitta is in town!

The Ultimate Fighting Championship (UFC) head cheese was back in front of the cameras after making headlines last week for this. Once again, Fertitta was on the hot lukewarm seat about his athletes; specifically, what he’s doing to combat fighter concussions.

As the NFL will attest, it’s no longer the kind of dirty little secret you can just sweep under the rug.

From his CNN interview:

Because we are so crazy about it and concerned about it, we had an event recently in Dublin that had sold out. The main event was a kid named Joe Duffy, from Ireland. He was the hometown kid who everybody wanted to see. We were made aware that five days, six days prior to the fight, he had a flash knockdown, or a flash knockout in practice. We made the decision to cancel the fight because fighter safety is the utmost important thing. That’s a perfect example.

Not sure there was much of a choice, considering a doctor already ruled Duffy unfit to compete.

Fertitta also claims the promotion is doing “massive amounts” of medical testing, which includes brain scans at the Cleveland Clinic in Las Vegas, Nevada. Just don’t expect anyone at ZUFFA to share those results. After all, they wouldn’t want you to know what Junior dos Santos looks like under the lamps.