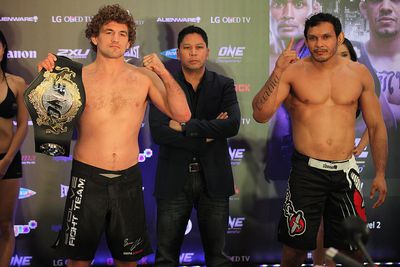 Luis Santos missed weight, and his ONE Championship welterweight title bout against Ben Askren was pulled off from Friday’s card in Singapore. The 170-pound champion made heavy accusations against “Sapo”.

According to Askren, the Brazilian was seen eating for over an hour at the hotel before declining to hold his weight under 190 pounds to still fight him in a non-title bout, and went to a hospital to ask for an intravenous rehydration. Askren also said Santos contacted Titan FC officials asking to fight for the promotion after declining to face him twice earlier this year.

So unbelievable you have to hear it for yourself!

ONE Championship president Victor Cui is also not happy with Santos. When the fight was cancelled, Cui said “Sapo” pulled off “one of the most unprofessional things I have ever seen”.

I’m completely disgusted. Sapo fails to make weight then despite Askren offering a fight at 190lbs the next day, Sapo…

“Sapo”, who defeated Bakhtiyar Abbasov in 53 seconds in his only fight under the ONE Championship banner, released a statement to ….View original article