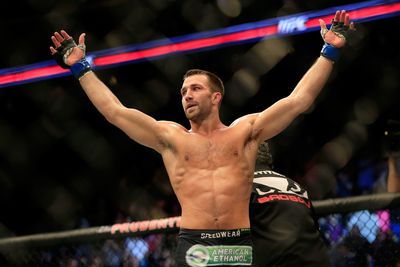 “I never thought he was that good (at the time), but he was tough and his wrestling was good,” said Rockhold in an interview with MMAfighting.com. “Maybe it’s the confidence I have in myself. I think I’m the guy who is going to be his superior. I bring everything he’s going to have trouble with.”

Rockhold, 14-2, said he’s been following Weidman’s career since he himself was just a “Strikeforce Challengers guy” trying to make a name for himself in 2009.

The hulking middleweight entered UFC in 2013 on a high note, riding a nine fight winning streak and carrying the Strikeforce belt around his waist. That momentum came to a screeching halt with a knockout loss to the “TRT version” of Vitor Belfort.

However, Rocky has turned things around since, rattling off four finishes in a row, including a two round dismantling of Lyoto Machida in April. That opponent provides a middle ground for the two gladiators, as Weidman defended his belt against Machida via five round unanimous decision at UFC 175.

“There’s always been tension between me and Weidman,” ….View original article