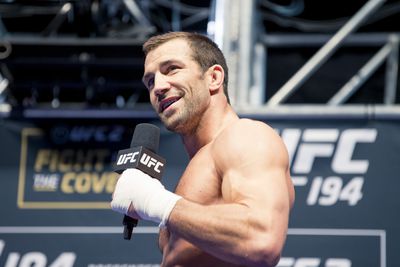 Luke Rockhold, hasn’t been shy in saying that he’s going to dominate Chris Weidman and take the UFC middleweight championship on Saturday night at UFC 194 at the MGM Grand Garden Arena in Las Vegas.

But as far as who gets the next title shot, whether it’s against Rockhold or Weidman, that will likely be determined just moments before they step into the cage.

The other two members of the middleweight “big four” collide right before the title bout. Ronaldo Souza (22-3,1 no contest) puts his eight fight winning streak up against Yoel Romero (10-1), who has won his last six.

It’s a rare case of a UFC fight between two men who came into MMA having captured world championships in their respective original sports, Souza in Brazilian jiu-jitsu and Romero in wrestling.

As a former world champion and 2000 Olympic silver medalist, Romero would be, along with flyweight contender Henry Cejudo, one of the two best credentialed wrestlers on the UFC roster. While Cejudo has the edge in taking gold, Romero’s success at the top of the world stage in wrestling had far more longevity.

Rockhold went five rounds with Souza four years ago in Strikeforce, in winning a decision that gave him the Strikeforce title, but freely admits both he and Souza are different fighters today.

He’s never faced Romero, but given the fact he trains with Daniel Cormier on a regular basis, he has full comprehension of what a wrestler at that level can do.

Rockhold wouldn’t make a prediction on Saturday’s fight, past saying that if it was a championship fight between the two of them, or a main event, he’d go with Souza. But it’s a three-rounder.

“In a five-round fight, I’m going to favor Jacare,” he said. “Yoel Romero has shown some signs ….View full article