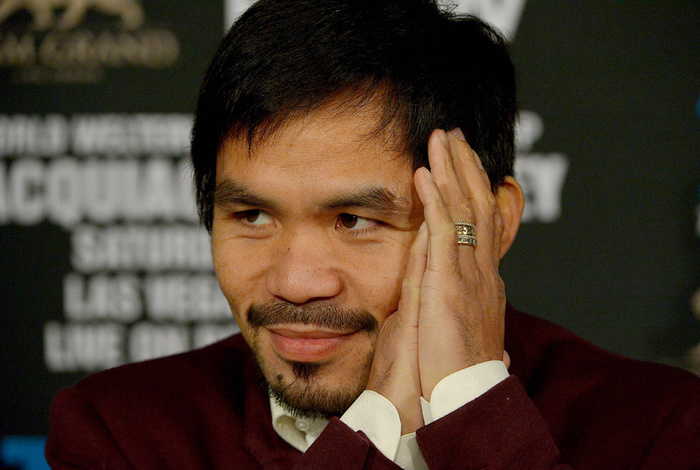 Boxing superstar Manny Pacquiao has been appearing in news headlines for his recent comments about the potentials in fighting UFC champ Conor McGregor. The topic came up due to the constant chatter of McGregor potentially facing off against Floyd Mayweather Jr., and while there is no amicable negotiation on the foreseeable horizon (and probably never will be), it has shown how lucrative a crossover fight would be, and has the other big names of the Sweet Science chiming in.

“In boxing? In boxing [I would fight McGregor] but not in [UFC], just boxing,” Pacquiao said in an exclusive interview with Fox Sports. “I didn’t see [footage of Conor sparring], but if we are talking about Conor McGregor and boxing, it’s different. Boxing is different than MMA.”

Pacquiao is set to fight undefeated Australian Jeff Horn on April 22rd for what is slated to be the first of an international “farewell tour” for the fighter, so presumably a later match with McGregor could be conceivably happen. Add to the fact that McGregor did actually apply for a boxing license in the state of California, and there is one less obstacle to consider. Knowing Pacquiao (who made only $4million in his last bout against Jesse Vargas), and purse splits would also likely be much less of an issue between the two.

That is actually one of the biggest holdups in progressing the potential showdown between Mayweather and McGregor forward. UFC President Dana White offered Mayweather a $25 million purse with a potential percentage of the PPV split, which the fighter laughed off by calling White a “f*cking comedian” and showing off his watch. In a previous interview, Mayweather stood firm on his demand of a guaranteed $100 million purse, and with that being a response to McGregor’s own $100 million demand, it seems negotiations will remain at a standstill.

So then maybe the idea is that if McGregor can’t get a fight with boxing’s biggest star, perhaps one against the sport’s second biggest star would do. But maybe that isn’t really all that true either.

If you’re anything like me, the reaction to a potential bout between Pacquiao and McGregor is sort of…meh. It’s not that Pacquiao isn’t qualified (he would most likely beat McGregor in a pure boxing match), but it’s that Pacquiao is losing relevancy in his sport. He’s certainly still considered an elite fighter, but also past his prime, so a win over the Filipino senator carries much less consequence. And though his fights are full of action, his personality is not; the pre-fight buildup to any of his matches is comparatively bland. This kind of reflects how the interest in a Mayweather/McGregor showdown is more about the personalities involved rather than the actual fighting ability. Truth be told, McGregor fighting Pacquiao would probably be more entertaining than him fighting Mayweather.

This then also gives some insight as to who has the upper hand in negotiating a fight between McGregor and Mayweather. White made some interesting comments comparing the last PPV sales of each respective fighter (Mayweather’s 350k to McGregor’s 1.5mil) and it brings into question of who actually needs whom in the equation. The popularity of a Pacquiao and McGregor bout kind of shows the current stock of the Filipino fighter, and perhaps reflects how well a potential rematch with Mayweather would do. It’s safe to say that it would not do nearly as well as its predecessor.

So in perhaps one of the biggest flips of the story, this could then suggest that Mayweather actually needs McGregor more in this instance, despite all the Money man may think about his marketability. Of course, this discussion is all kind of trivial given the unlikelihood of any boxing match involving McGregor coming off, but it does give an interesting insight to the relationship between marketability and how fight negotiations are leveraged, and that topic is worth paying attention to.

Floyd Mayweather Willing to Give Conor McGregor $15 Million to Fight

Trump, Tyson, and Don King Ringside at Mayweather-McGregor Is a Fever Dream Fit For 2017