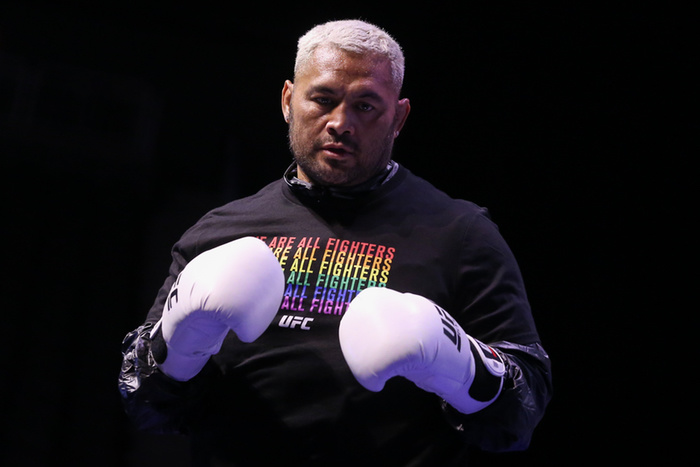 God bless UFC heavyweight Mark Hunt and his quixotic causes that are quickly turning into crusades. Is anyone in the dingy, corrupt, corporate world of professional fighting purer and more decent than the Super Samoan? First he responds to the unsurprising news that Brock Lesnar, who defeated him at UFC 200, had joined two of Hunt’s most recent opponents in testing positive for performance-enhancing drugs by declaring a one-man push for a fighters union, then he threatens the UFC with a lawsuit if the promotion doesn’t change its anti-doping policies and demands they put a provision in all his future contracts stipulating that a doping fighter forfeit all his earnings over to him, Hunt, rather than some nameless, faceless athletic commission. God love the man’s adamant resistance in the face of a great drug scourge, his great refusal to accept a compromised reality. Forced over and over again to fight enormous, dangerous men for whom being enormous and dangerous wasn’t enough, who felt instead that illicit hormonal performance enhancement was in order—faced with all that compromise and deviousness—Hunt has demanded justice and a simple sense of fair play. And while waiting, he’s turned down lucrative fights because the UFC wouldn’t include this PED Clause in his contract. And look what happens: The man the UFC wanted Hunt to fight after Lesnar, Josh Barnett, gets flagged by the USADA after failing a drug test—not his first, by the way. No wonder Hunt is so fired up.

Yesterday the USADA announced that Lesnar had been officially suspended for one year following his two failed drug tests last year, one before the night of his fight with Hunt on July 9 and the other that night. That suspension comes on top of the one-year suspension and $250,000 fine handed down last month to the professional wrestling star by the Nevada Athletic Commission. A year and a quarter-of-a-million dollars is nothing to sneeze at, of course, until you consider that Lesnar made 10 times that much to fight Hunt, that it was doubtful he was ever going to return to the Octagon after their fight, and that he was pumped full of banned substances while trying to beat up another human being.

In response to yesterday’s news Hunt continues to be Hunt, telling Stuff.co.nz that if his next opponent, Alistair Overeem, who has his own checkered chemical past and who was yet to accept Hunt’s PED Clause, tests positive after their fight on March 4, Hunt will skip right over the UFC this time and sue Overeem.

“I’m not young, I’m 42-years-old,” Hunt said. “In six months I’ve already missed out on a couple of fights, I’ve already missed out on a couple million dollars. At the end of the day I’ve stuck to my word. I’ve got no option, I’m in a contract that I can’t get out of. I had no other option. I can’t work anywhere else so what am I supposed to do, let my family starve? Every fighter I fight, if he gets caught through the process then I’ll sue him personally. If I don’t get help from the company I’ll do it myself. [Dopers] should be struck from the records and taken everything off them. They don’t deserve to get a cent. This sport is already harsh enough as it is. When you add in steroid use it makes it even worse.”

While some might argue that MMA is just the kind of cathartic outlet a civilization dehumanized by litigation needs, and that Mark Hunt, as the living embodiment of the old-fighters’ spirit—a sprit that would in most cases happily do away with the subtleties and back-handed cruelty of the courtroom in favor of four fists in an alley somewhere—should settle his disputes in the cage, the man is no brute. He knows the cage is agnostic when it comes to issues of fairness and justice. And as a fighter in the truest sense he is devoted to the principles of fairness. In a real fight, no advantage should be given any man and none taken and the loser must take his loss as a cruel but essentially reality of life. But when opponent after opponent after opponent after opponent, world without end, coaxes Hunt into the cage to risk his neck for money, only to prove himself anatomically unclean and morally corrupt, a born fighter like Mark Hunt can’t be blamed for using every weapon at his disposal to beat back the brutes, in the name of decency, civilization, and a purer kind of cage-fighting.

Mark Hunt Not Happy About Brock Lesnar’s Anti-Doping Exemption, but Whatever…