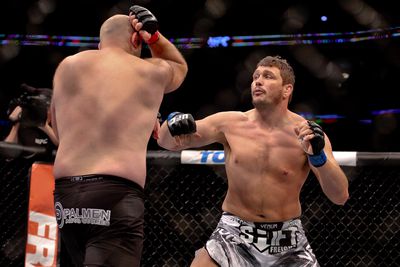 “Meathead” will fulfill the final bout on his current UFC contract when he tangles with Travis Browne at UFC Fight Night 81 on Jan. 17, 2016.

Win or lose, “Meathead” is unlikely destined for Conor McGregor money and also believes that the revenue “Notorious” has brought his business partners at ZUFFA will not have an impact on his contract negotiations … or any other fighter’s for that matter.

Mitrione discusses McGregor’s financial impact on the sport of MMA on the “Three Amigos Podcast” (via Bloody Elbow):

“I don’t necessarily agree that it’s going to have to force a trickle down to everybody else because they — the UFC — don’t care. They’re going to say, ‘Yeah, Conor’s making $100 million, so you’re going to take 10 [thousand] and 10 and you’re going to like it, or your just not going to fight and that’s all there is to it. Like Paige [VanZant] and Sage [Northcutt], they get paid more than I do. I’ve had 13 fights in the UFC — should’ve been 14 with [Stefan] Struve — and Paige and Sage both get paid more than I do. That’s ridiculous.”

While other popular competitors are more optimistic about their chances of attaining a few extra shekels from UFC, Mitrione (9-4) just doesn’t see it happening. As much of an exciting fighter and colorful personality as the 37-year-old Illinois native is, he’s still not raking in that Sage Northcutt coin.