Home MMA News Max Holloway: ‘It takes a special, unique person to do’ what Conor McGregor is doing
ShareTweet 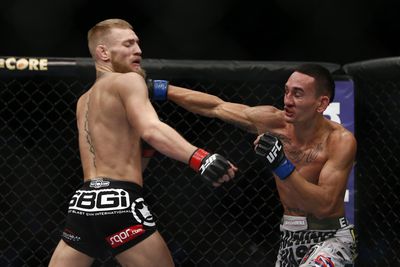 LAS VEGAS – It’s been a little over two years since Max Holloway lost to Conor McGregor, it what was the Irish firebrand’s first fight on U.S. soil. Now McGregor is not only carrying an interim title in the featherweight division, but he’s headlining one of the biggest weekends in UFC history against Jose Aldo.

As for Holloway? He’s rebounded from the loss nicely. He’s fighting on the same UFC 194 pay-per-view as McGregor, and he’s quietly looking for his eighth straight victory. Should be beat Jeremy Stephens on Saturday night, Holloway will have made it two years in a row where he posted 4-0 records.

In other words: Since losing to McGregor, the 24-year old Holloway has been a hotter fighter than anyone in the division, including McGregor himself. The problem is he’s down to earth — maybe too down to earth. He’s having a hard time finding a star role in the Conor McGregor Show.

Not that Holloway is going to change any time soon.

“No, not at all. I’m not a talker,” he told MMA Fighting during the Ultimate Media Day at the MGM Grand. “I’m a doer. I just like to go do stuff. I’m not going to change me just for some extra money. I think the UFC does a pretty good job of backing me. It’s going to come if I keep doing what I’m doing and I’m not going to change, and I’ll stay rooted. That’s what it’s about.

“Some people change and they forget and they get caught up in this act. It sucks, when they try to get out of the act people look at them as this act and it’s hard to get away from it. I ain’t trying to be one of those guys. I’m a ….View full article