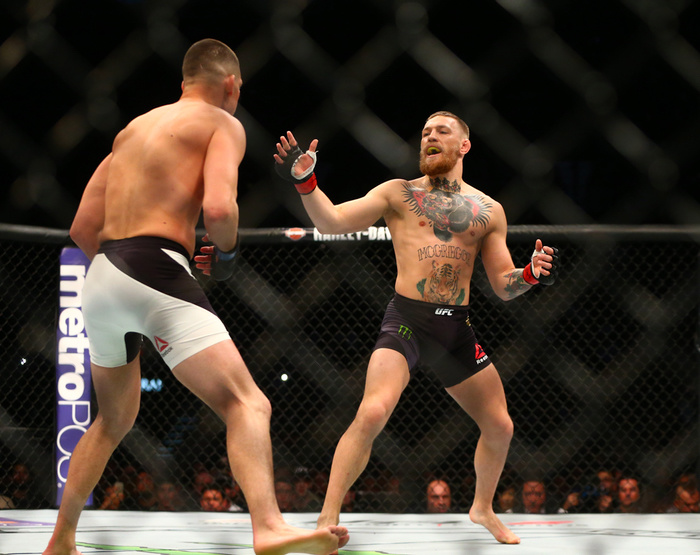 Speaking at John Kavanagh’s ‘Win or Learn’ book launch in Dublin last weekend, Conor McGregor promised that he would “toy” with Nate Diaz in their rematch, which takes place in the main event of UFC 202 on August 20 in Las Vegas.

Understandably, after Diaz claimed the second round win over ‘The Notorious’ in March, the fact that the Stockton cult hero had stepped up on eleven days notice to fulfill his duty made the win even more impressive. On the flip side of that, McGregor’s risk of jumping up to welterweight was criticized given how quickly the Irishman appeared to gas in the fight.

After taking to the stage in the Mansion House to join his coach on stage, McGregor told the evening’s host Mike Sheridan how he has specifically geared his training towards preparing for Diaz, which is far cry from his common ‘there is no opponent’ mantra leading up to previous bouts.

“For the last fight I was preparing for Dos Anjos for the lightweight belt, a small stocky southpaw,” said McGregor, as reported by Balls.ie. “I didn’t actually bring in any southpaws, not one. The reason why we don’t really care what the opponent is doing is because they always pull out, every damn time. This time, I know Nate’s going to show up.

“With the injury, I kind of left my cardio days behind. I didn’t rack up the miles on the clock like I used to in my amateur days. I’ve hit the road and I’m building up my cardio that way. I’m feeling very ….View full article