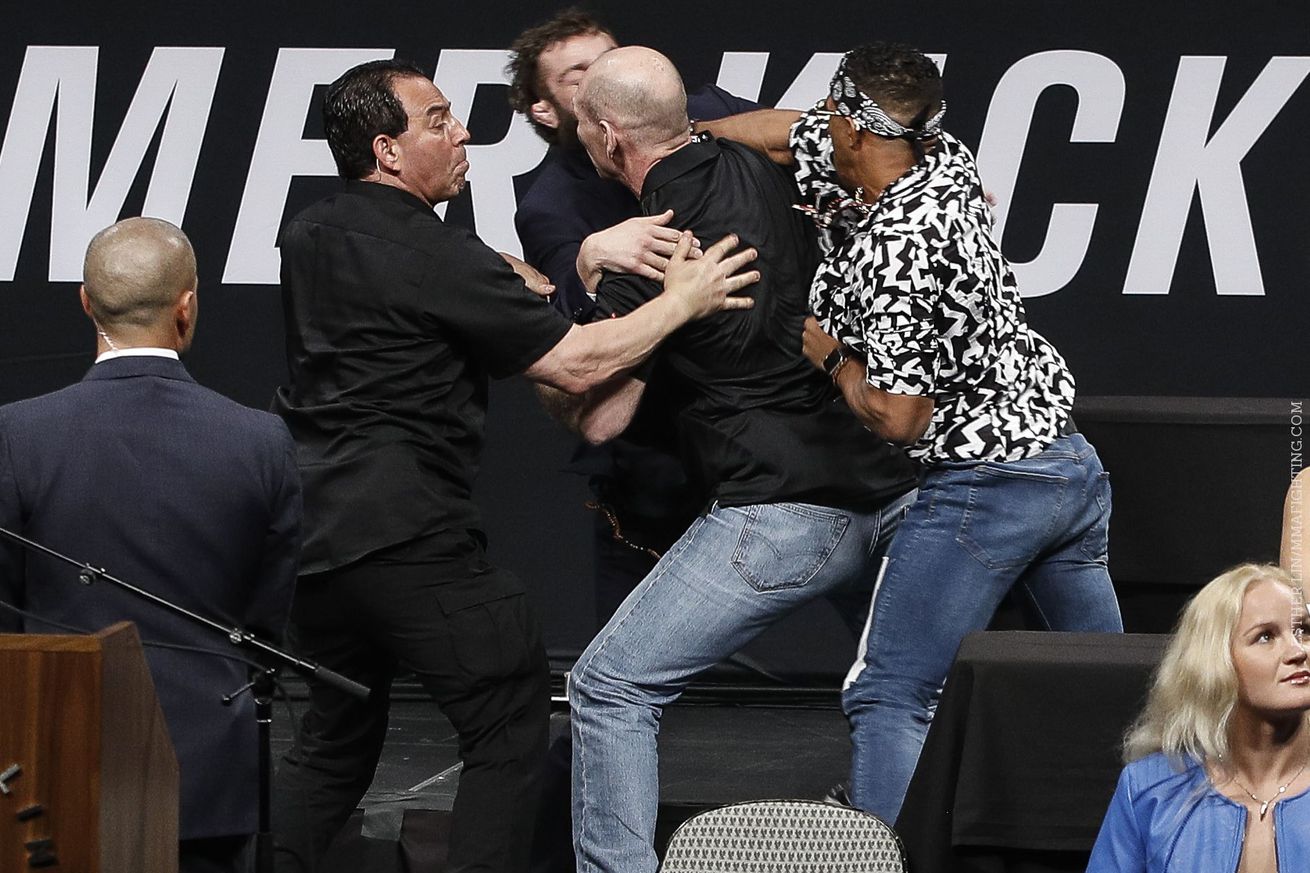 The UFC Summer Kickoff Press Conference was highlighted by a matchup that was flying somewhat under the radar.

With a presser stacked with big name fighters such as Jon Jones, Daniel Cormier, Chris Weidman, Holly Holm, and more, lightweight contenders Michael Chiesa and Kevin Lee – who are scheduled to fight in the main event of UFC Fight Night 112 on June 25 – were able to steal the show with an unexpected brawl that erupted halfway through the press conference. The scuffle was triggered when Lee mentioned Chiesa’s mom during their back-and-forth trash talk.

Being a momma’s boy, Lee’s comments didn’t sit well with Chiesa, even if the comments weren’t necessarily offensive.

“There is an unspoken rule with competitors, men and just among people in general that it’s okay to talk shit, it’s okay to promote a fight, but you just don’t bring families into it,” Chiesa told Ariel Helwani on Monday’s edition of The MMA Hour.

“People are saying, ‘oh he didn’t even say anything that bad,’ but just the fact alone that the word ‘mom’ came up, and in the manner when you’re saying, ‘oh you’re going to show up and your mom is going to be there,’ and yeah you didn’t say anything that bad, but you were in route to going that path. It’s not up to him to know that I’m a momma’s boy but you know, the media knows, the UFC knows, for Christ’s sake if my mom is in attendance in a fight right after I win, they have a camera on her. That’s just my one nerve, that one button you can push to really get that kind of reaction out of me, so I don’t regret it at all, but I know it won’t happen again.”

Following the mom comments, Chiesa rushed Lee, who was sitting across the stage, but was held back by two security guards. That’s when Lee jumped in and was able to deliver a right hand on Chiesa’s face. ‘Maverick’ believes the punch was a cheap move from Lee.

“I didn’t even know he punched me until I got back stage,” Chiesa said. “As they’re pulling me back I was asking Reid, ‘did he punch me? did he punch me?’ and they were like, ‘yeah, dude. He socked you right in the face.’ I think it was a cheap shot because I’ve gone back and watched it, and if you look at the pictures, as I’m running up I get grabbed by two guys and he runs up unattended to and he just punches me.

“It’s not like nobody was in between us and I had run up and there was nobody intervening. He had every right to punch me in the face, but I even said over there, ‘dude, security needs to get in the middle of this because I’m about to drop this mic and run over there,’ and sure enough that’s what happened. It’s just funny that I got two guys on me and he runs up to me and punches me in the face. I’m not going to get on this show and talk a bunch of shit about him, all I know is that I got punched when I didn’t even know I got punched, I think that’s all I need to say. It doesn’t even matter anymore, it happened, I got punched in the face, didn’t even leave a mark on my face, whatever, it’s fine. We’re going to fight in six weeks and that’s the best part about it, we get to continue what we left off on June 25th.”

Chiesa doesn’t regret getting in a brawl with Lee, but is ready to move on and focus on his fight in Oklahoma City.

“It’s water under the bridge, it’s nothing to dwell on, you know,” Chiesa explained. “I’ve always been a pretty cool customer, I never let my emotions get the best of me, so that was just totally very uncharacteristic of me. That’s just the type of person I am, I’m not a hot head, it’s just water under the bridge and Mother’s Day just passed, so you know, it was so ironic that this happened on Mother’s Day weekend, but I’m just back to the task and it’s all about the fight now.”